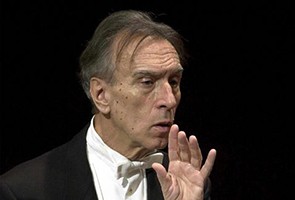 A small and simple funeral procession accompanied the Master's 21 January through the streets of Bologna. After, and absolute privacy, the one who was Director of the Scala and the Berlin Philharmonic. Scarcely had flowers, the family wanted that money should go towards those in need.

Also to those who need it most, the Master did Abbado let the music come. He took her to hospitals and prisons. He had a special dedication with the young people creating the European Youth Orchestra one to Gustav Mahler Youth Orchestra. He was the inspirer of the System of Orchestras of Venezuela created by José Antonio Abreu and developed by Gustavo Dudamel. At the Scala in Milan he founded the Orchestra della Scala with which he programmed concerts with especially cheap tickets, which allowed access to the Theater to a new public that, until that moment, I didn't go to La Scala. He considered that “music education is, actually, the education of man.

The week after his death, Daniel Barenboim, as a tribute to the Master, conducted the Scala Orchestra interpreting the funeral march of the “Heroic” Symphony, from Beethoven, with the room empty and the doors open...