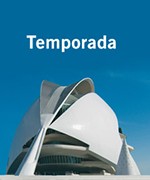 After a season 2012-2013 at a high level, Valencia Palau de Les Arts Reina Sofia continues this season by paying tribute to Verdi and Wagner. The cut for this season and the threat of a new ERE for your personal, They have not prevented scheduling a promising season.

It will start 19 October. The Maestro Zubin Mehta will conduct a "Traviata" by Verdi already saw in 2005 at the Salzburg Festival under the stage direction of Willt Decker. This successful production will be performed on this occasion by the Bulgarian soprano Sonya Yoncheva and the Romanian tenor Stefan Pop, with them, the young baritone Simone Piazzola. La Traviata has already been programmed here in 2010, with great success, and everything indicates that its seven representations will once again fill the Valencian arena.
Zubin Mehta will also be in charge of directing "Die Walküre", Richard Wagner, the days 3, 6, 9 Y 16 of November. This is the replacement of Carlus Padrissa's premier production from La Fura dels Baus, en coproducción with Il Maggio Musicale Fiorentino.
Who has not had the opportunity to enjoy this impressive production, with the spectacular projections by Franc Aleu and the scenery by Roland Olbeter, now has a new chance.
Repeat among the cast of singers some of those who already did it in the season of 2007 and it has been, Until now, the greatest success of the Valencian Palau. Jennifer Wilson (Brünnhilde) y Stephen Milling (Hunding). Together with them, young Wagnerian interpreters such as
Thomas Johannes Mayer (Wotan), Heidi Melton (Sieglinde), Elisabeth Kulman (Fricka).

We go to February 2014 con “Manon Lescaut”, by Puccini and the Musical Direction of Plácido Domingo. This is the production of the Teatro Regio di Parma under the stage direction of Stephen Medcalf, who already directed "The Magic Flute" last season with great success. In this production the cadre of singers is headed by Mattia Olivieri, Rafael Davila and Maurizio Murano.

He 23 Y 26 February and 1, 11, 13 Y 15 of March, llega to Palau "Italian in Algiers". And it is that Rossini is not missing either this season after "La Cenerentola" and "Il barbiere di Siviglia" of past seasons. At the baton will be Ottavio Dantone, and as stage director Joan Font, Els Comedians. The leading voices will be Erwin Schrott (Mustafa) and Silvia Tro (Isabella). It is a co-production with the Teatro Real, and Maggio Musicale Fiorentino, the Houston Grand Opera and the Grand Théâtre de Bordeaux. A colorful production where the costumes are one of the protagonists.

One of the important moments of the season comes the days 27 Y 30 March and 3, 6 Y 9 of April. Plácido Domingo gets off the stage and takes the stage as “Simón Boccanegra” in a production by Palau of the year 2007. We already had the opportunity to listen to Domingo in his new record at the Teatro Real three seasons ago. In the direction of the scene Lluís Pasqual, as a set designer, Ezio Frigerio, illuminated by Albert Faura and the wardrobe of the Oscar-winning Franca Squarciapino. Sunday will be accompanied on stage by the Chinese soprano Guanqun Yu (Amelia Grimaldi) and the Italian tenor Ivan Magrì (Gabriele Adorno).

To end the season, the Palau has chosen a Valencian composer, Manuel Palau and his work "Maror". A little-known composer from the first half of the 20th century, Until now. The script is by Xavier Casp, also Valencian, like the letter. It was released in concert version at the end of the 20th century and now arrives at the Palau under the baton of the also newcomer at the head of the OCV Manuel Galduf. The Choir of the Generalitat and the Escolania de la Mare de Déu dels Desemparats also take part in this production.

The season is completed with symphony concerts. The first the 22 of September, during the open day.
In addition to the titular director of the OCV, Omer Meir Wellber, who will conduct a total of five concerts, the batons of Zubin Mehta, Riccardo Chailly and Ottavio Dantone will combine their directing of their operas with those of a concert.