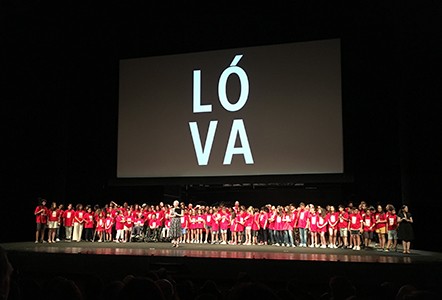 The project Lova -The Opera, A vehicle Aprendizaje-, the Royal Theater launched in 2007, meets 10 years with a path full of successes in the educational world in Spain.

LÓVA is an education project in which students in a class (mostly primary) They are organized as an opera company, each assuming a professional committed to create and produce an opera throughout a school year, with the involvement of teachers, Parents and schools. The program of each curricular area -Mathematics, Language, Ed. Physical, Knowledge of the, etc.- it applies to the needs of production and creation of the opera, with a proven improving academic performance and integration in the classroom. It's about a project-based learning (ABP).

In these 10 years have participated in LÓVA more of 7000 students in preschools, primary, special, high school students in 15 Autonomous communities. He Teatro Real hosts every summer intensive teacher training course led by Mary Ruth McGinn, and a children's company every year his opera debut at the Sala Gayarre.

In season 2006-2007 the Royal Theater launched Lova project –The opera, Learning a vehicle-, through which teachers from three public schools in the Community of Madrid, trained at the Royal Theater, They turned their elementary classrooms Small companies created, They produced and premiered his own operas. [See documentary film]

Each student participating in Lova (between the 5 and the 16 years) ─como author assumes responsibility for the text, of the music, scenographer, illuminator, Carpenter, costume designer, makeup artist, stage-manager, Press Officer, marketing, public relations, etc.─ and, team up, You must work throughout the school year to achieve its objective and produce ─crear ópera─, integrating this learning in language classes, Physical education, Mathematics, English, Artistic education, Environmental Awareness, etc. Lova opera becomes a springboard for learning, through the integration of each student's work on a common project, in which everyone participates, without exclusions.

Today, 10 years later, 7000 students have premiered over 250 operas in preschools, primary, special, middle and high fifteen Autonomous Communities. Lova is also developed in other institutions, as in the Madrid III Penitentiary Center, Asprodema Day Center of Logroño, or the Official Language School of A Coruña.

During the current school year 50 companies holding the Lova project in Andalusia, Aragon, Asturias, Castilla y León, Valencian Community, Galicia, The Rioja, Madrid and the Basque Country, thanks to teacher training courses offered by the Royal Theater every July, directed by Mary Ruth McGinn. American teacher brought the Royal theater 2006 This learning format created in Seattle in years 70 and later welcomed by the Washington Opera, achieving spectacular results in Spain at the level of cognitive development and social integration.

The European Comission Lova has been recognized as an example of good practice for the development of cultural competence (Cultural Awareness and Expression Handbook); and the UNESCO Chair in Cultural Policy at the University of Girona is conducting an evaluation of Lova, which will end in June 2018.