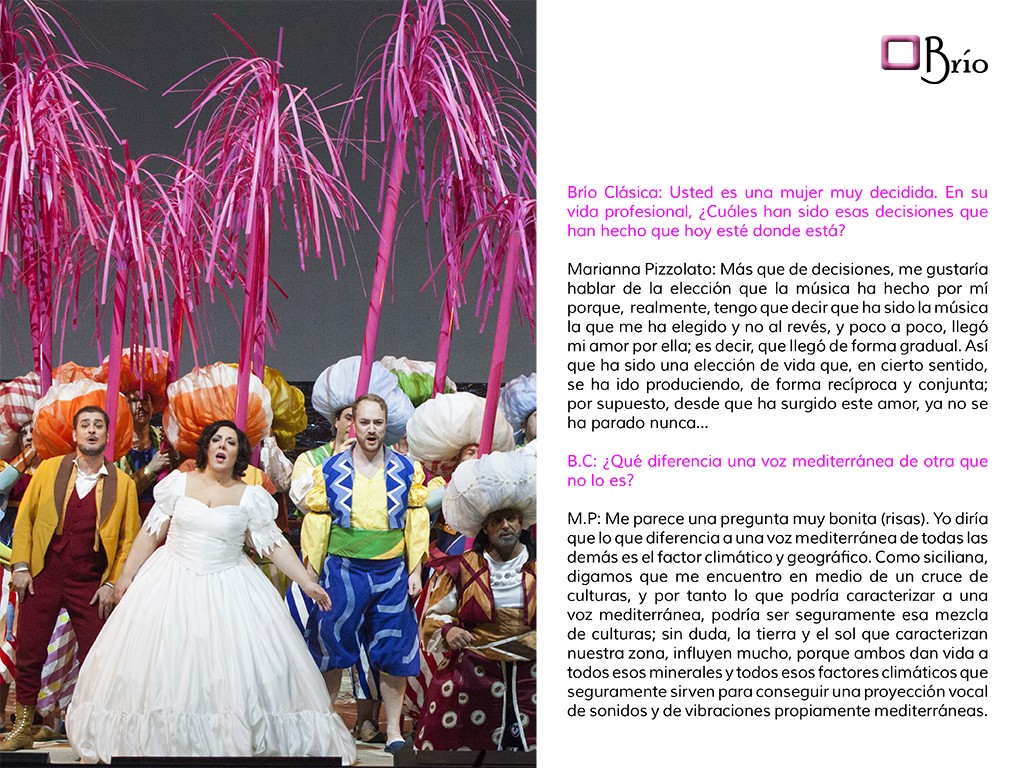 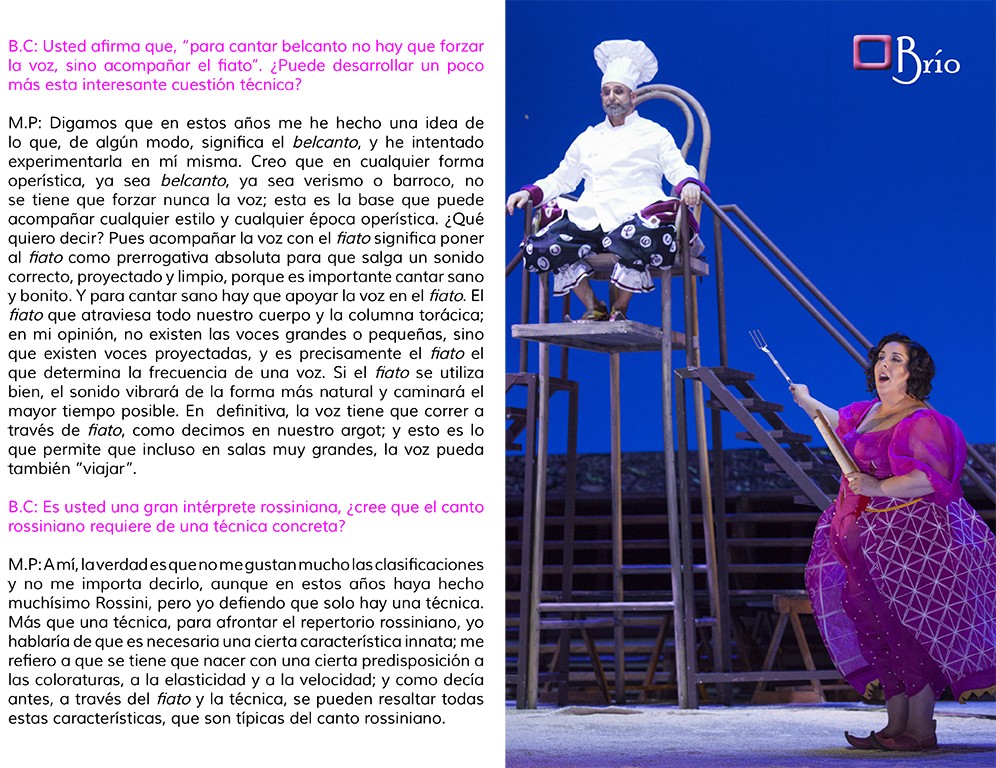 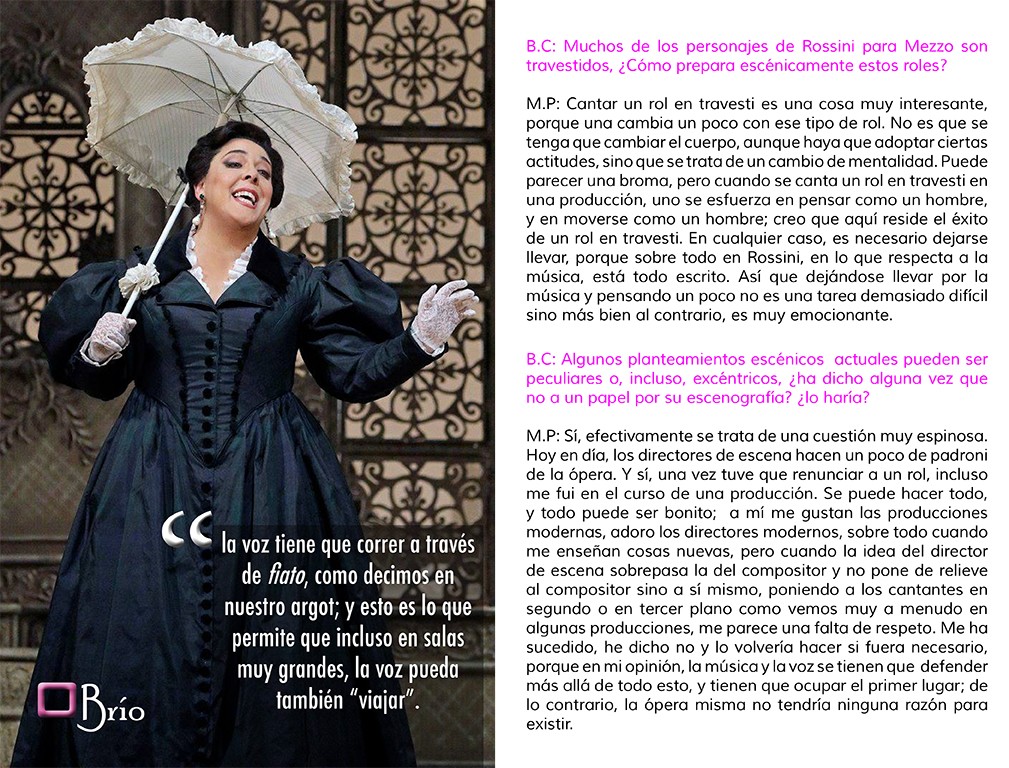 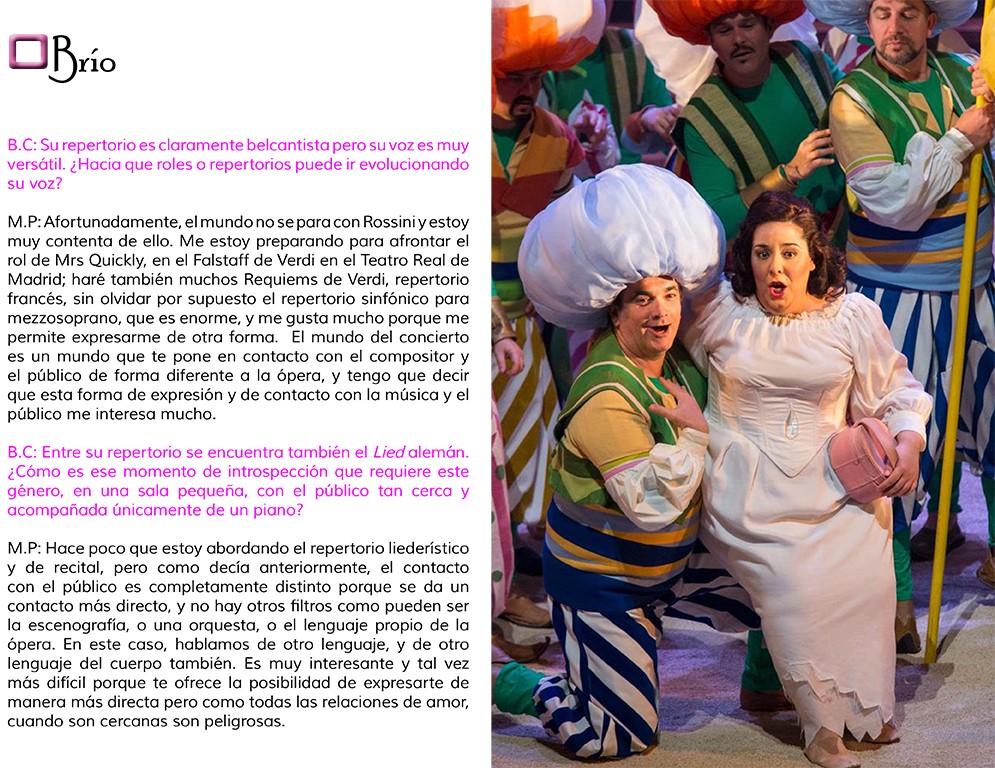 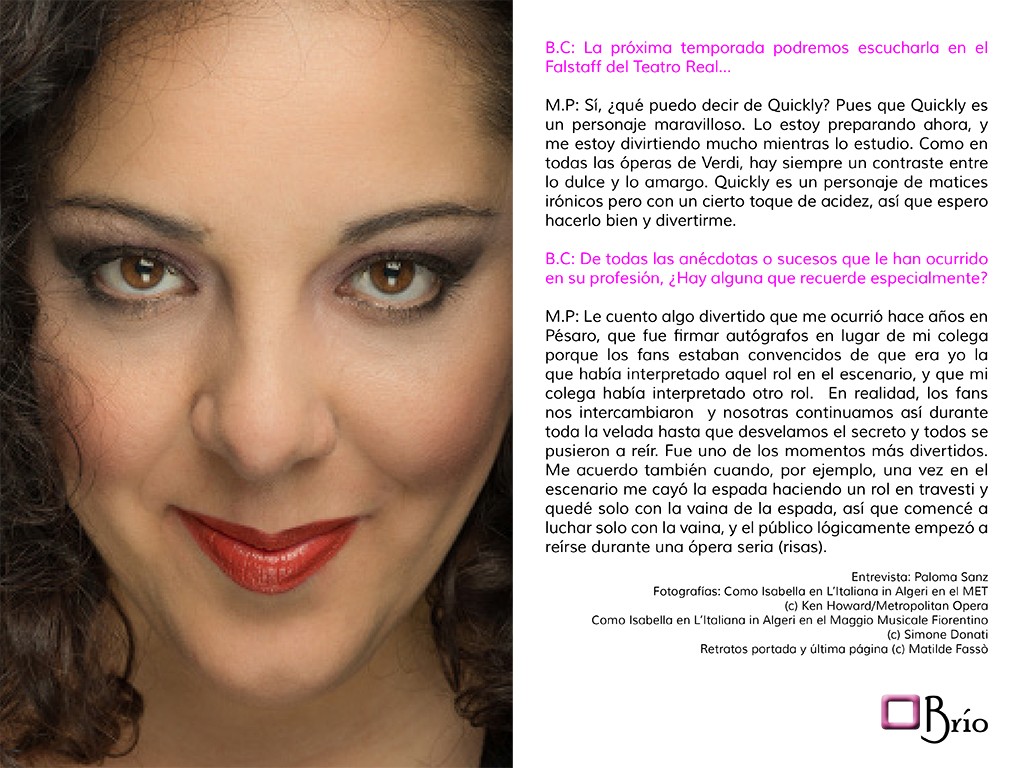 With his deep voice and a smile sunny eternal, Spain returns to the mezzo-soprano Marianna Pizzolato to play the title role of L'Italiana in Algeri by Rossini, Summer Festival of El Escorial, and the San Sebastian Musical Fortnight. Passionate about belcanto, We will surprise with his Mistress Quickly of Falstaff verdiano, next season in the Classical Theater Real.Brío: You are a very determined woman. In his professional life, What were these decisions made today is where it is?

Marianna Pizzolato: Rather than making, I would like to talk about the choice that music has done for me because, Really, I have to say it was the music that chose me, not vice versa, and little by little, it was my love for her; that is to say, that came gradually. So it has been a choice of life, in some way, It has taken place, mutual and jointly; Of course, since it has emerged this love, no longer it has never stopped ...

B.C: What differentiates a Mediterranean voice of another who is not?

M.P: I think a very nice question (laughs). I'd say that what differentiates a Mediterranean voice of all others is the climate and geographical factor. Como Sicilian, Let's say I find myself in the midst of a cultural crossroads, and therefore what might characterize a voice Mediterranean, It could be probably the mixture of cultures; definitely, the earth and the sun that characterize our area, much influence, because both give life to all those minerals and all these climatic factors that will surely serve to get a vocal projection and actual sound vibrations Mediterranean.

B.C: You affirm that, "Bel canto singing voice must not force, but accompany the fiato ". Can you develop a little more this interesting technical issue?

M.P: Let's say I have become an idea of ​​what these years, somehow, It means the belcanto, and I tried to experience it myself. I think in any form operística, either belcanto, whether or baroque verismo, You not ever have to strain your voice; This is the base that can accompany any style and any operatic era. What I mean? For accompanying the voice with fiato means putting the fiato as absolute right to leave the correct sound, designed and clean, because it is important to sing healthy and beautiful. And for healthy singing voice must be supported in the fiato. The fiato that runs through our body and thoracic spine; In my opinion, there are no large or small voices, but there are voices projected, and it is precisely fiato determines the frequency of a voice. If it used well fiato, the sound vibrates in the most natural way and walk as long as possible. Definitely, the voice has to run through fiato, as we say in our jargon; and this is what allows even very large rooms, the voice can also "travel".

B.C: Are you a performer Rossini, Do you think the song rossiniano requires a specific technique?

M.P: To me, the truth is that I really do not like rankings and I do not mind saying, although in recent years he has done a lot Rossini, but I argue that there is only one technique. More than one technique, to face the repertoire rossiniano, I talk about that a certain innate characteristic is required; I mean you have to be born with a predisposition to certain coloratura, the elasticity and speed; as stated before, through fiato and technical, you can highlight all these features, which they are typical of edge rossiniano.

B.C: Many of the characters are transvestites Rossini for Mezzo, How scenically prepares these roles?

M.P: Sing a role in transvestite is a very interesting thing, because one changes a little with that kind of role. Not that you have to change the body, even if they adopt certain attitudes, it is a change of mentality. It may seem a joke, but when a role is sung in transvestite in a production, one strives to think like a man, and move like a man; I think here lies the success of a transvestite role in. In any case, it is necessary to get carried away, because especially in Rossini, with respect to music, is all written. So he carried away by the music and thinking a little is not a too difficult task but rather the contrary, It's very exciting.

B.C: Some current approaches may be peculiar scenic or, even, eccentric, Have you ever said no to a role for its scenery? I would?

M.P: Yes, indeed it is a very thorny issue. Nowadays, stage directors make some opera padroni. What if, I once had to give up a role, I even went in the course of production. You can do everything, and everything can be beautiful; I like modern productions, I love modern directors, especially when I teach new things, but when the idea stage manager exceeds the composer and does not highlight the composer but himself, putting the singers in second or third level as we see very often in some productions, I think is disrespecfull. It has happened to me, I said no and I would do if necessary, because in my opinion, music and voice have to defend beyond all this, and they have to take first place; on the contrary, the opera itself would have no reason to exist.

B.C: His repertoire is clearly belcantista but his voice is very versatile. To what roles or codes you can evolve their voice?

M.P: Fortunately, the world does not stop with Rossini and I'm very happy about it. I am preparing to address the role of Mrs Quickly, in Verdi's Falstaff at the Teatro Real in Madrid; I will also many Requiems by Verdi, French repertoire, not forgetting of course the symphonic repertoire for mezzosoprano, which it is huge, and I like it because it allows me to express myself differently. The concert world is a world that puts you in touch with the composer and the audience differently opera, and I have to say that this form of expression and contact with music and public interests me very much.

B.C: Among his repertoire it is also the German Lied. How's that moment of introspection that requires this kind, in a small room, with the audience so close and accompanied only by a piano?

M.P: Recently I'm addressing the lieder repertoire and recital, but as stated above, contact with the public is completely different because a more direct contact is given, and no other filters such as scenography, or orchestra, or the language of the opera. In this case, We speak another language, and other body language also. It is very interesting and perhaps more difficult because it offers you the chance to express more directly but like all relationships of love, when nearby they are dangerous.

B.C: Next season we hear in the Falstaff of the Teatro Real ...

M.P: Yes, What I can say Quickly? Well, that is a wonderful character Quickly. I am preparing now, and I'm having so much fun while you study. As in all Verdi's operas, there is always a contrast between sweet and sour. Quickly is a character of ironical nuances but with a touch of acidity, so I hope to do well and have fun.

B.C: Of all the stories or events that have happened in her profession, Is there any particular remember?

M.P: I tell you something funny that happened to me years ago in Pésaro, who was signing autographs in place of my colleague because fans were convinced that it was I who had played that role on stage, and my colleague had played another role. Actually, We exchanged fans and we continue like this throughout the evening until we reveal the secret and everyone started laughing. It was one of the funniest moments. I remember also when, for example, once on stage I dropped the sword role in making a transvestite and was alone with the scabbard, so I started to fight alone with pod, and the public logically began to laugh during a serious opera (laughs). 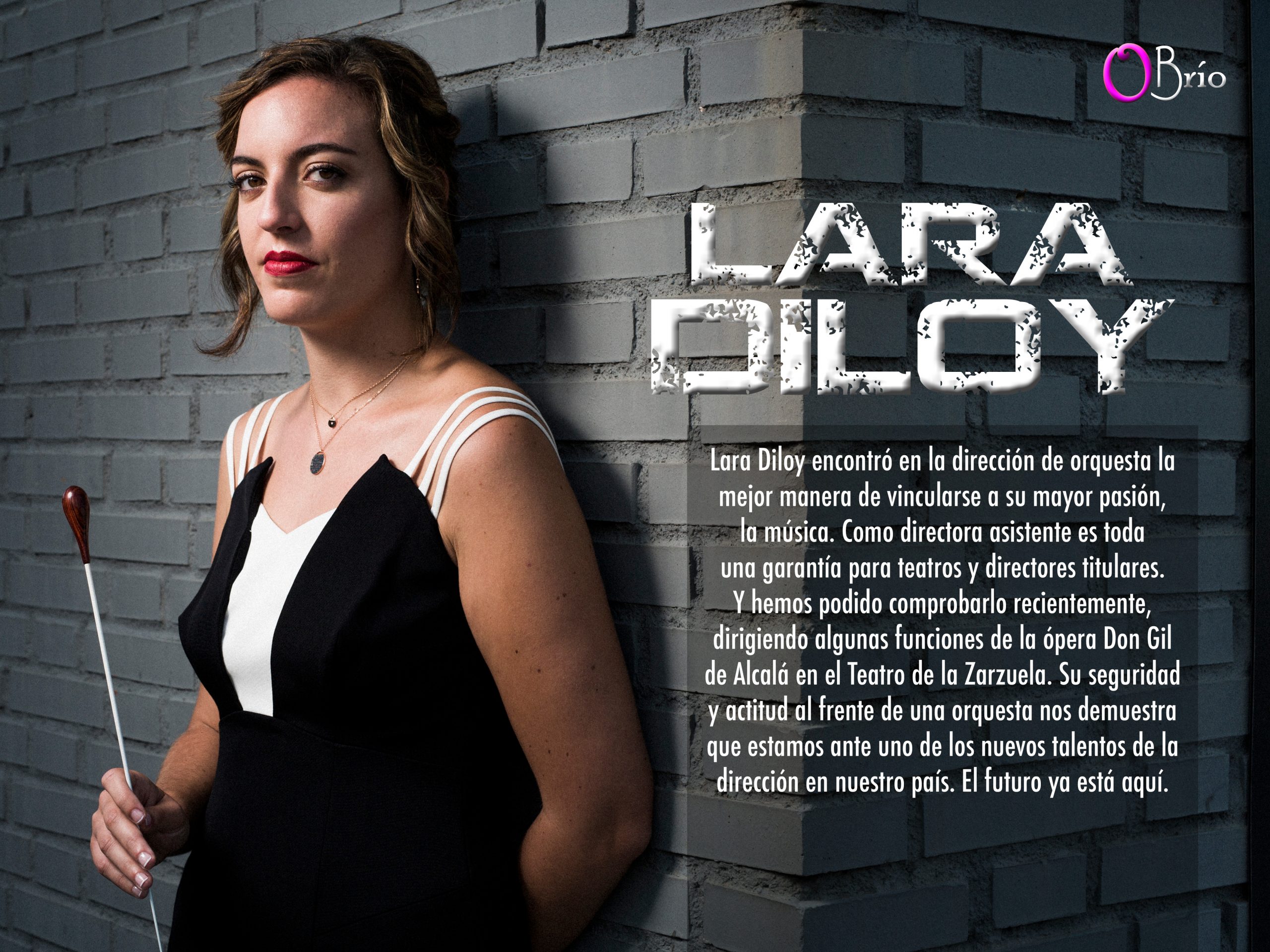 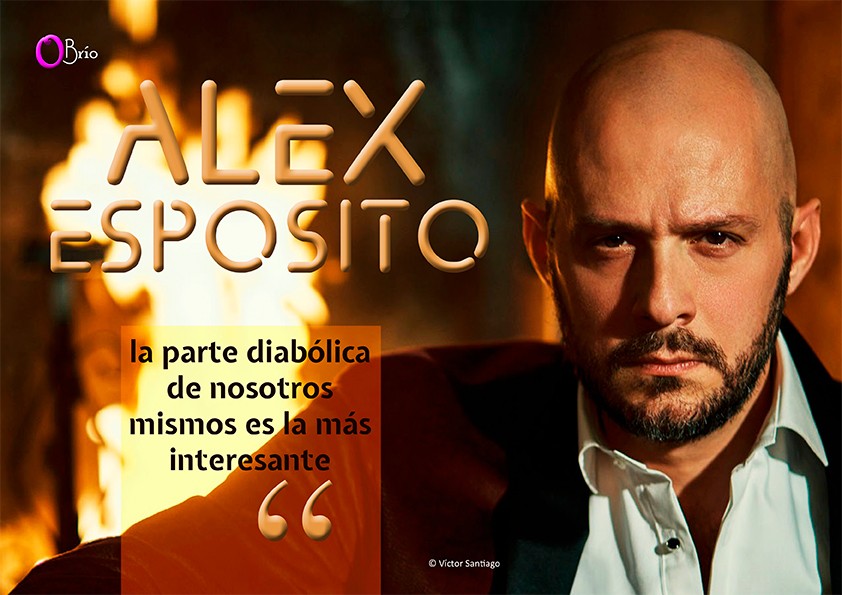 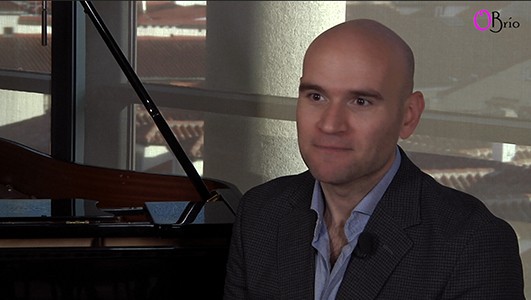 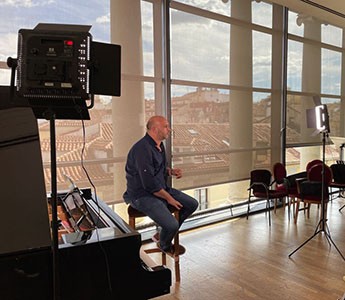 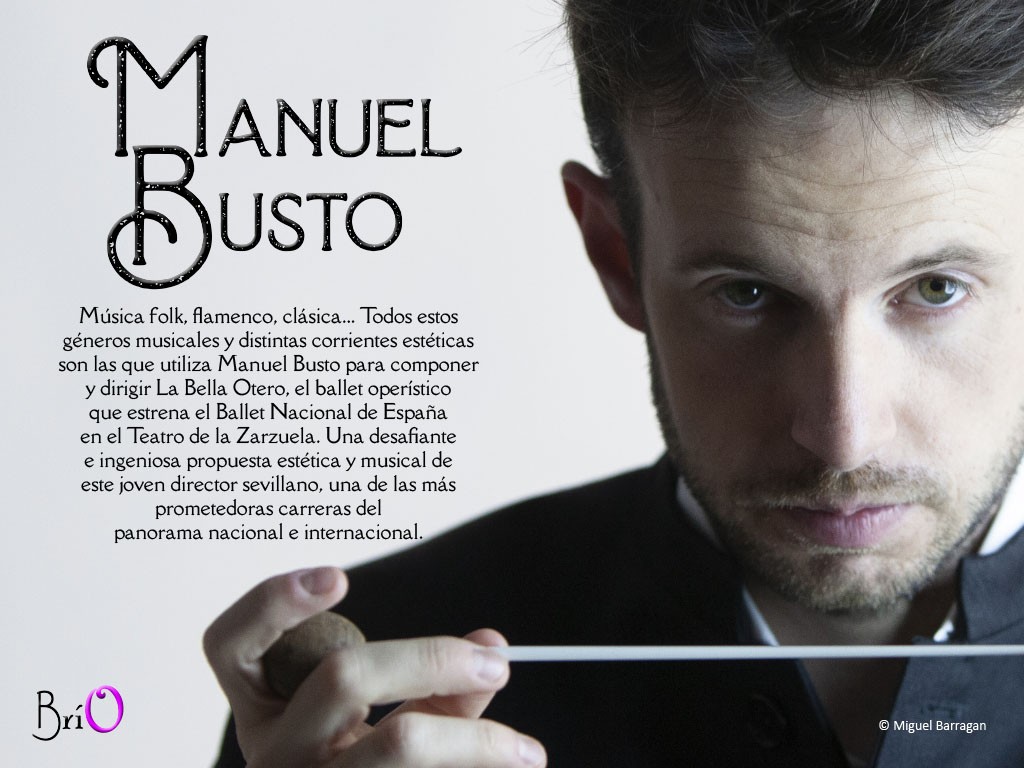 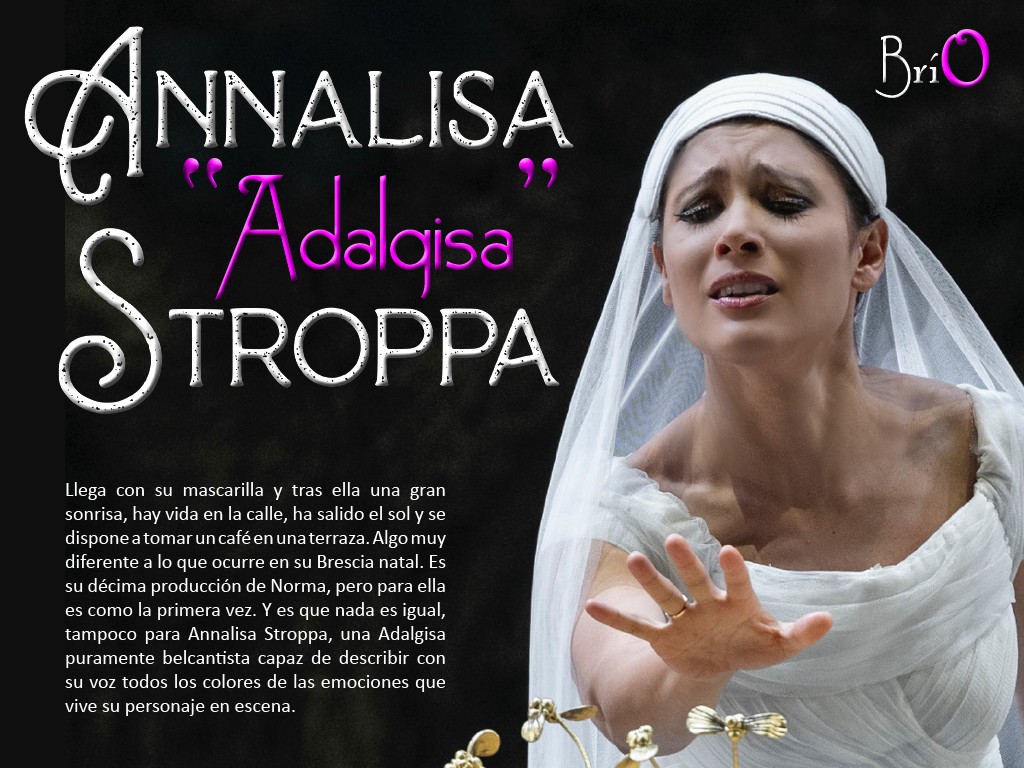