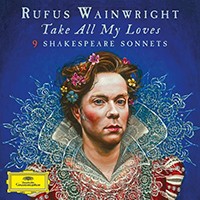 RUFUS WAINWRIGHT celebrate the year Shakespeare with an album in which sonnets by the great playwright merge with his new compositions.
Rufus surprises again with his new album ‘Take All My Loves – 9 Shakespeare Sonnets’, a collection of his own compositions on various texts by the great writer. They take part in this album: Florence Welch, Martha Wainwright and soprano Anna Prohaska, plus some of the most admired actors of the moment, as Helena Bonham Carter Y Carrie Fisher among others.

Son and brother of folk singers, Rufus Wainwright started playing the piano at an early age, just with 6 years, and with 13 I already toured with the musical group “The McGarrigle Sisters and Family”, a folk group that included Rufus, his sister Martha, his mother Kate and his aunt Anna. From the 20 years began his solo stage, and since then he has become a renowned artist. His music has marked lyrical influences ranging from Opera to French chanson, going through the musical.