ONE presents “Fearless”, the solo debut of Manuel Blanco 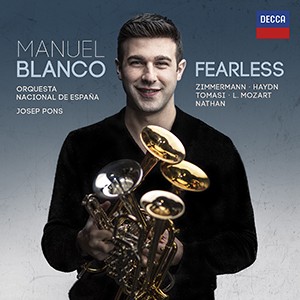 The National Orchestra of Spain under the direction of Josep Pons Y Decca They present their new album Fearless, whose release marks the debut solo album Manuel Blanco, trumpet soloist of the orchestra. Fearless proposes a wide and colorful tour of some of the most complex and representative works of the repertoire for trumpet, including works Zimmermann, Haydn, L. Mozart, Tomasi Y Nathan.

Since the interpretation of the Concerto for Trumpet and Orchestra by Bernd Alois Zimmermann, one of the key works of the album, granted in 2011 Blanco first prize at the prestigious ARD International Competition in Munich, Manuel combines his solo career with his trumpet solo as the National Orchestra.

The world of music currently contains an incredibly complex cosmos of styles and trends, richer than at any previous time. We hear new genres like rap or techno with jazz, classical or contemporary productions, encompassing music of various ethnicities and even the chirping of birds and whales. If we look at the past, We found a flute 40.000 years old with holes forming a musical scale. From a bone bird, this incredibly intelligent and planned procedure shows that since the beginning of the history of modern man, dated ago 300.000 years, human consciousness has evolved and improved, including music in this process. If we turn our gaze to our times, modern neuroscience has almost monthly new discoveries that change the methods of learning and teaching concepts. Sure our flutist ago 40.000 He not spent years researching stress or flow, but the music and exerted an immense influence on the development of the human spirit, generating processes that today we know that connect different brain areas to make music, an art that also connects people who follow their magic.

In this rich era he was born a young, Manuel Blanco GómezLimón, whose talent and excelled at an early age and was promoted lucky way by a set of the best teachers: among others, Professor José Ortí, old trumpet soloist of the National Orchestra of Spain, and the conductor, trumpeter, musicologist, Professor and Dr. Martin Baeza-Rubio, old trumpet soloist Deutsche Oper Berlin. I was lucky and honored to meet this young man in Spain, and from the outset of our collaboration there was a deep sense of understanding, empathy and friendship. His musical understanding always expressed starting from the sound, developing a huge impulsivity and a tenderness that takes the breath away. The trumpet is turned into sound chameleon of all the expressive possibilities of music in their corresponding times. Until 30 years, Trumpet Concerto Nobody Knows Trouble I See Bazi, which it was the alias of the composer (Bernd Alois Zimmermann), He bores the nickname stigmatizing "CAN NOT TOUCH!”. Since then the situation has completely changed and that nickname is no longer applicable to this great concert: now is the most frequently performed works of the great master. In 1954 Adolf Scherbaum, then trumpet star, He tried to master the intricacies of the trumpet solo part accompanied by the orchestra of NWDR (hoy NDR) under the baton of Schmidt-Isserstedt. The particular difficulty of this work would be to interpret the indications that the composer proposes, most common in jazz, such as glissando, blue notes y “trino labial” o shakes. Although the spelling the composer sometimes shows his lack of technical knowledge and seems awkward (for example, writes in German "Streitdämpfer" [it does not mean anything] instead of "Straightmute" [muted para trompeta]), what is above all it is to find the special "spirit" of music. Both in their challenging technical demands of fast passages highly virtuous, as in the balancing act of interpretation between the avantgarde and jazz, It is where Manuel Blanco can better demonstrate its maturity as an artist of our time. Not in vain, the interpretation of this work gave him 2011 victory (first prize) the prestigious ARD International Competition in Munich, obtaining with it the highest rating in the history of the competition. The second work of this album is the famous Trumpet Concerto in Eb Joseph Haydn, a mature work of prominent founder of Viennese classicism, It composed shortly after his successful second trip to London, which launched his international fame to the world. It is not surprising that the next year to write this composition compose the hymn "Gott erhalte Den Kaiser Franz" [Keep God Emperor Francis], a small variation on the theme of the second movement of the Concerto for Trumpet. composed in 1796, trumpeter Anton Weidinger Esterhazy Orchestra needed four whole years to interpret this work in all its magnitude on the keyed trumpet that he had developed. This concert for trumpet and orchestra is great, among other reasons, the thematic and contrapuntal density and maturity showing the grandmaster. The central idea of ​​the base that thanks to the "sensational new keyed trumpet" can play a scale and in the lower octave, and then emerge the main themes of the three movements. In the first movement is further added "movements quintas" the main idea along with brief (but important) dissonance in the third part of the compass.

The main problem in previous interpretations of this concert, recorded hundreds of times, is poor dedication previous trumpeters, directors and music publishers have given the manuscript of the work. The author of these lines is also considered part of this group, like most of his colleagues. The composer intentionally kept trumpet solo "naked", that is to say, no signs of joint or phrasing, designed with a margin of maneuver as broad as possible so that the interpreter stand out with skill strengths, masquerading as far as possible the weak, both natural trumpet like instrument provided with new keys. This vacuum trumpeters have used countless new editions and publishers to carry out their personal interpretation proposals. proposals articulation and phrasing were written without stating his own and without taking into account the manuscript. Too often the result of that arbitrariness was a thundering wild heroic trumpet in the third movement leads to something like circus music; regardless, or not knowing, interpretation that precise indications are given in almost all scores of Haydn only in the early stages of the corresponding movement then, evidently, They should apply to the whole issue, the entire movement or the entire work. In this recording with the soloist Manuel Blanco met for the first time an interpretation that respects the three movements and shines the melodious tone of the work. fixed idea of ​​this cantabile applies equally here for the first, the second and third movement. Maurice André was the trumpeter who premiered the work of Henri Tomasi, rich in contrast and sometimes wild. Semaine Sainte à Cuzco is the musical representation of a pagan-Christian ritual Easter in Peru. It was composed for trumpet and organ (as well as for rope 2 forced harps Year 1964. Written in three movements, The piece begins with violent cascades dancers to deploy in its central part, a melody as a prayer. Henri Tomasi, winner of the Grand Prix de Rome 1927, he had already composed in the year 1948 a complete trumpet concerto that is considered one of the major works of the repertoire of this instrument.

Before 1762, Leopold Mozart wrote a nine-movement Serenade in D major that, besides called Concertino for Trumpet, two horns and strings, also it contains the so-called trombone concerto in three movements, which is directly below the Concertino for Trumpet. In addition to the peculiarity of interpreting music style galant, with great consideration of the strengths and weaknesses, Leopold Mozart in his work includes the skill to produce natural harmonics beyond the natural harmonic twenty. Thus occurs in the second half of the eighteenth century a sudden period of splendor of the art of baroque trumpet throughout Central Europe. Likewise, Michael Haydn, brother Joseph, Johann Samuel Endler, Johann Matthias Sperger, Georg Philipp Telemann, Jan Dismas Zelenka, Franz Xaver Richter, Georg Reuter, Heinrivh the young Carl Biber and many others, suddenly it produced a final phase of the art of playing the trumpet in the register of the clarinet in the third octave. As touched by lightning, this repertoire disappears with the onset of the French Revolution and the subsequent rotation of all values, going from aristocracy to a bourgeois society that can no longer find pleasure in the dusty glamor of the excesses of ancient trumpet and focuses on Viennese Classicism and his favorite instruments: the violin, flute and clarinet. Having reached the end of the album, we hear again the melody of the first piece: Nobody Knows The Trouble I’ve Seen… this time with funk clothes in a composition on the anonymous spiritual Federico Nathan, composed and recorded for the first time globally for this album. With an improvisation on this issue ends here a tour of the world of the trumpet, where Manuel Blanco plays in all registers this instrument of kings. And he knows shine at all levels.