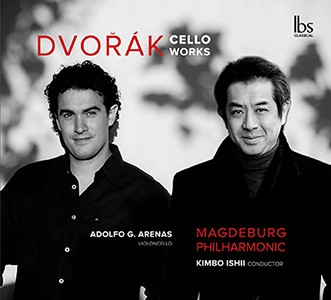 The Spanish cellist born in Munich, Arturo Reverter defined as "one of the classiest Spanish cellists, more intellectual grounds, more range and more interpretive solvency, always starting from a point of writing and taking, especially, an emotional insight that radiates and beyond ", just recorded the complete works for cello and orchestra Antonin Dvorák, near Magdeburg Philharmonic and Kimbo Ishii, Classical label in Ibs.

After the success of his previous album with the five sonatas for cello and piano by Beethoven with Christopher Park, Adolfo Gutierrez Arenas returns to the recording market with a new monograph, besides the known Concerto for Cello and Orchestra in B minor, On. 104. but Dvorak, incluye Peace (Silent Woods), On. 68, No. 5, B. 182, the Rondo in G minor Op. 94, B. 181, and arrangement for cello and piano Lied Lasst mich allein, with the participation of Juan Carlos Garvayo. The journalist Ruben Amon disk signature notes, which has a booklet written in Spanish, English and German.

Recognized as one of Spain's most internationally renowned cellists, Adolfo Gutierrez Arenas has performed as soloist with the most prestigious orchestras, among other, la London Symphony Orchestra, the Royal Philharmonic in London, la Gewandhaus de Leipzig, the Montreal Symphony Orchestra or the National Spain, and he has worked with directors of the stature of Vladimir Jurowski, Charles Dutoit, ton Koopman, Riccardo Chailly, Miguel Harth-Bedoya, Friedrich Haider, Krzysztof Penderecki, Pablo González, Antoni Ros Marbà, Michael Thomas, Edward Gardner, among others.