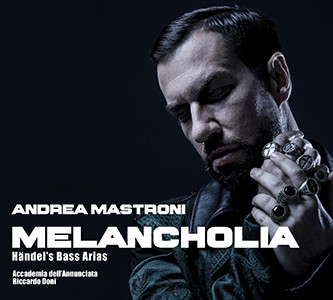 In early December will be launched to the international market Melancholia (Egea Music), a disc of arias of the most important composers of the Baroque period of Italian opera, German settled in England georg Friedrich Handel, under the notorious Italian Andrea Mastroni just recorded with the Orchestra Academy dell'Annunciata directed by Riccardo Doni. This new album focuses on little known compositions intended for the string "deep bass", especially for the singer Antonio Montagnana -of operas Ezio and Orlando-, an extraordinary interpreter, thanks to his talent and possibilities, He inspired the composer characters specially created for low, rope at the time had a residual presence in musical theater at the absolute role of prima donna or shift castrato. "When looking for material for this album", relata Andrea Mastroni, "I found an artistic personality in the service of a" scenic word 'rather than literal around a strongly expressive damatúrgico climate'. Italian singer wanted to embody some of the characters that gave life to this extraordinary artist Handel genius enabling the creation of strong theatrical impact papers.

Melancholia's repertoire also includes arias for other outstanding performers of the time, as Gustavus Waltz O Giuseppe Mari Woods, who gave life to works like Ariodante, King Richard I of England y Aci, Polyphemus and Galatea, a tour de force to be officially presented in Milan 4 February 2018 and returns to life a repertoire now almost forgotten.