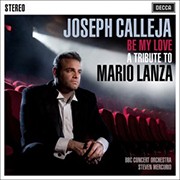 Baluarte will have the privilege of hosting the first of seven European concerts of Joseph Calleja and the Navarra Symphony Orchestra. Paris, Munich, Amsterdam, Prague, Vienna and Baden-Baden will be the next appointments. The presentation tour of his new album "Be My Love" is a tribute by Calleja to the tenor Mario Lanza, the mythical Italian-American tenor and actor who died prematurely in 1959 to the 38 years and that he was a true legend in the first half of the 20th century thanks to his participation in numerous films. The concert will include many of the melodies that made him famous.: from popular or Neapolitan songs to great opera arias like Nessun dorma (Turandot) o And the stars were shining (Tosca). The direction will be in charge of Frédéric Chaslin, principal conductor of the Santa Fe Opera and the Jerusalem Symphony Orchestra.
Be my love
Joseph Calleja
Navarra Symphony Orchestra
DECCA