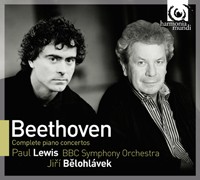 His recording of Beethoven's Sonatas of Integral received critical acclaim. Now, Paul Lewis adds to his discography recording five concerts for piano and orchestra. Recorded between July 2008 and March 2010, with the BBC Symphony and the prestigious director Jiri Belolaveck, Lwis let fly again all his poetic spirit and recreates a portrait of Beethoven with all its lights and shadows.