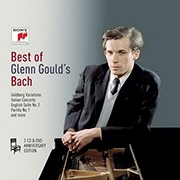 Much has been written about the impact caused by the first recording of Bach's Goldberg Variations made by the Canadian pianist Glenn Gould in 1955, that sparked the birth of a legend. But although it was the beginning of a brilliant career as a performer of Bach, its roots were much further back. His Bach was unconventional and since then each new recording of the composer is calibrated according to the parameters introduced by Gould.. His habit of sitting slumped at the piano, the expansive gestures of his hands and arms, the absence of legatos and the sustain pedal, his impressive concept of polyphony and his extreme sense of rhythm present a pianist as if he had come from another planet.
For this reason, it is of special significance that, commemorating the 80 glenn gould birth anniversary (1932-1982), three commemorative editions are published that reflect their great interpretations:
Best of Glenn Gould’s Bach (2CD + DVD) offers the Goldberg Variations in addition to the Italian Concerto, English Suite No 2 and Partita No 1, among other works.
This Is Glenn Gould. Story of a Genius (2CD + 1 DVD and book 60 pages) is a limited edition that is the perfect introduction to the pianist, presented as a dictionary (from the A of “alias” to the R of “recording studio”) with Bach and non-Bach selections and a book of 60 pages with unpublished photos.
The Glenn Gould Collection is a new collection of CD's (20 volumes containing two to six CDs each) with the complete recordings of Glenn Gould for CBS/Sony Classical.