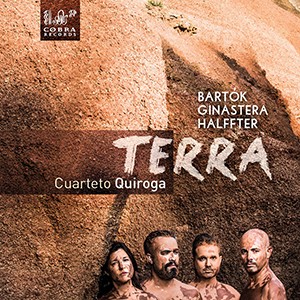 A folk and edgy dialogue between Bartók, Ginastera and Halffter .

The Cuarteto Quiroga publishes his fifth album, Terra, a project with which they intend to vindicate the essentially popular nature of music through the compositions of Bela Bartok, Alberto Ginastera Y Rodolfo Halffter, In addition to rebel against labels that simplify the world of musical creation. Terra, produced fourth album with the label Cobra Records, It leads from the 1 June on sale online and will be available in stores from 26 of June. Before, the day 16, the grouping made up of Aitor Hevia, Cibrán Sierra, Josep Puchades Y Helena Poggio will make a presentation of the album at 20:00 hours in the Mahler's Fifth.

This album confirms the formidable artistic moment of Cuarteto Quiroga and appears after a series of albums that have had a great reception from both the public and specialized critics., receiving awards and distinctions from the most important Spanish magazines, European and North American: su debut Statements (Cobra 2012); (R)evolutions (Cobra 2013), dedicated to the early music of the Second Vienna School; Free but lonely (Cobra 2015), with works Brahms; and Piano Quintets. Granados Y Turina (Harmonia Mundi, 2015), with pianist Javier Perianes.

The album includes String Quartet no.. 2, Op. 17., work composed by the Hungarian Béla Bartók in 1917; Eight Tientos for String Quartet, On. 35 (1973), by Rodolfo Halffter; and String Quartet no. 1, On. 20, a composition by Alberto Ginastera dated in 1948. "Our journey begins in Bartók, universal reference for all 20th and 21st century composers in this approach to composition, and puts him in contact with two very interesting figures from the Hispanic universe: the Argentinean of Catalan origin Alberto Ginastera and the Madrilenian Rodolfo Halffter, exiled in Mexico after the Civil War”, comments Cibrán Sierra, violinist of the Quiroga Quartet.

“It seems that if you play a bagpipe you make ‘folk’ music, if you hit a yembé you make ‘ethnic’ music and if you strum a guitar you make ‘POPular’ music, but if you play a Ländler transcribed by Schubert or a Minuet by Haydn, then you make 'serious' music, ‘Cultured’ and ‘classic”. This is how Sierra explains the starting point of this new recording adventure.

The intention of Terra is to question the subjectivity of labels in any artistic manifestation, especially music, through three authors classified as "classics" who integrated the popular tradition with total naturalness to their work. Tanto Bartók, how Ginestera and Halffter contributed their creative genius to the musical tradition of their land. “If we have reached the point of considering Bartók or Schubert's music more ‘cultured’ than a traditional Galician melody, which, at the same time, is classified as ‘popular’ compared to that written by those great composers, we have done it for reasons unrelated to the nature of the music itself, that he does not understand at all about aesthetic categories that are nothing more than class prejudices or market interests ", Sierra concludes.