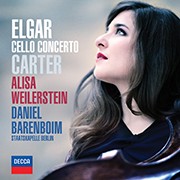 The Decca debut of the brilliant young American cellist Alisa Weilerstein, already considered by some media as the successor of the famous cellist Yo-Yo Ma, constitutes one of the most exciting events at Decca in many years. Conductor Daniel Barenboim has been a fervent advocate of Alisa Weilerstein's extraordinary talent ever since he accompanied her at the Elgar Concert as part of the European Concert held in 2010 and Oxford, broadcast on television throughout Europe. Together they have made a recording of heartbreaking intensity. Elgar's Concerto is paired with a contemporary masterpiece by the recently deceased Elliott Carter, whose work has often been championed by Barenboim, and what has been until his death at 103 years the dean of American composers.