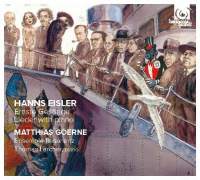 Hanns Eisler He was born in Leipzig 6 of July 1898. After two years as a soldier in World War I, he became a pupil of Arnold Schoenberg in 1919, to which he dedicated his Piano Sonata Op. 1 in 1923. He moved to Berlin 1925, where he composed for choirs of workers and collaborated with Brecht (The measure, The mother) from 1928. Eisler initially moved to Paris, then to London, and finally exiled in the United States since 1938, where he created his most important works of chamber music. further, He collaborated in eight Hollywood movies, wrote his “Hollywood songbook” to texts by Brecht, Hölderlin and other.
In 1948, Eisler returned to Europe, first to Vienna and Prague and ultimately to East Berlin. Although he wrote the national anthem of the GDR to a text by Johannes R. cup, the conflict arose with the cultural bureaucracy of the GDR when he published his booklet “Johann Faust” late 1952. In 1959, He witnessed the premiere of his “German Symphony”, composed mostly in exile, in the Unter den Linden State Opera. He died 6 September 1962 East Berlin.
Distance, irony and melancholy are the aesthetic corollaries which characterize the “Serious songs“, lieder presented here, its atmosphere often evoke the desperation of those dark times. Early piano sonata Eisler conferred young an admiration that has never been attenuated.
The German baritone Matthias Goerne masterfully interprets these works, translating all the anguish and pain of the songs of Hanns Eisler. This album has been nominated for the BBC Music Magazine Awards 2014. The awards jury, dice: “This album of songs of Hanns Eisler is a revelation, with an amazing variety of texture and style. Matthias Goerne is sensitive to all the expressive nuances of the most intimate writing of the Austrian. And it is perfectly accompanied by the Ensemble Resonanz, Serious songs, and Thomas Larcher in Brecht songs written in exile.”