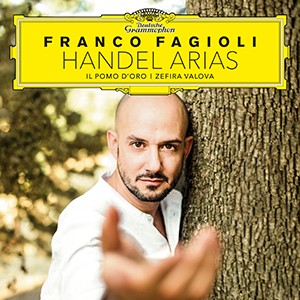 Franco Fagioli, one of the most privileged voices of our time, presents his personal selection of arias from Handel, a composer closely linked to the milestones of his career. Its sensual, velvety voice knows no bounds and his virtuosic coloratura and emotional intensity provide a unique approach to this repertoire, through which explores Fagioli wide range of emotions and musical affections typical hendelianos.

The album marks the Fagioli reunion with dynamic orchestra Tomato, with which the singer is on tour presenting the album in the best European theaters. "Handel Arias" is a ambitious international project with great Spanish participation in production. Franco Fagioli es el first counter signing an exclusive contract with the prestigious label German Grammophom. "Handel Arias" is the second album Fagioli as artist exclusivo de Deutsche Grammophon. The album brings together some of the most famous arias the composer ("Dear bride", "Shadow never fu", "Kids treacherous", etc.) as well as some lesser-known gems like "Ch'io split" or "Sento shine")

Beans es admired for his vocal technique belcantística and his unique voice, velvety, round and rich in shades, which is often compared with the large mezzosopranos all time. Franco is a very complete musician (He also studied piano and conducting career), which gives you a deep understanding and a privileged expression of his characters Fagioli, Argentine by birth, descendant of Italian and Spanish, Y Adoption Madrid (He has taken up residence in the city) is in love with our culture (including zarzuela, who sang her mother).

It is expected that the most recent recital recorded by the countertenor Franco Fagioli for Deutsche Grammophon, Handel Arias, is published internationally on 12 of January of 2018. Engraved with the original handle specialized instruments gold group Il d', The disc includes a personal selection of favorite arias twelve Fagioli rich and colorful world of Handel operatic, including fragments Serse, Rinaldo Y Ariodante. E Fagioli Il pomo d'oro perform this repertoire on tour in various halls and theaters in France, Germany, Belgium and Spain in January and March 2018.

The Argentine countertenor Franco Fagioli is a true stage animal, taking advantage of his tremendous ability to express emotion, and their vocal virtuosity, so that the characters he plays to life. It is in its liquid element in colorful baroque operas by Handel, which allow you to deploy the most of all aspects of his monumental talent.

For his new album, Handel Arias, whose international launch is scheduled 12 of January of 2018, Fagioli has delved into the riches of the composer's works to bring together twelve of his favorite arias. These are pieces that reflect many of the defining moments of his career, Explain: music that causes "chicken meat factor" the. "When I was recording, It was as if you were making snapshots of moments I wanted to capture forever ", dice. "When choosing arias, my only criterion was this: What excited me most parts when singing?"The result is a dazzling array-and very staff-, which reveals the profound veneration he feels Fagioli for this great baroque composer. "Handel's operas are an inescapable music for any countertenor", points. "His inimitable style captivated both singers and public. It was arguably the star of Broadway Baroque ".

Besides such famous pieces as "Ombra mai fu" from Serse an area he bravery "Turbine Venti" of Rinaldo, Fagioli has also chosen miniature jewelry, as radiant and ethereal "Ch'io split?" from Partenope, or "After Night" de Ariodante, who delights in golden light. Apart from the popularity of arias, he has come to their own personal interpretations, all they imbued with his deep understanding of Haendel and time, and an awareness of their own forces to reinforce their inspiration. Fagioli was determined that the recordings transmit the emotional development of the various characters, even without the context of the complete opera, and succeeds in such an extraordinary way that even the most famous arias hear with ears renovated and are sensitive to all "affetti virtuosi" music.

Franco Fagioli has found the perfect partners for this foray into the sound worlds of Haendel musicians Italian baroque ensemble Il pomo d'oro. Since it was formed in 2012, the orchestra has been exploring the subtleties of historical performance practice, and his recordings with Fagioli their instrumentalists make shine all the nuances of scores, showing in all its glory, from beginning to end, the extraordinary and weightless beauty of her voice, with its three-octave tessitura. Fagioli's enthusiasm for the music of Haendel is so contagious that extends the listener immediately. Baroque splendors emanate from your recordings, distinguishing it as one of the most exciting performers of our time.