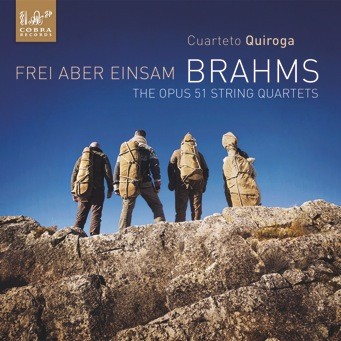 The launch of "Free but lonely" the next 15 of June, with the Opus quartets 51 from Brahms, It is the confirmation of the great artistic moment that the Cuarteto Quiroga. Brahms publishes these complex works in 1873, at forty years of age and after twenty erasers destroyed and as many long years of work since the first test. Quiroga chooses these pieces as part of his artistic journey after his last album ‘(R)evolutions ’dedicated to Schonberg, Berg Y Webern. Such work garnered the best praise, after the success of the album 'Statements' (2012) that achieved the unanimous applause of the specialized critics and the public internationally, as well as being awarded the Best Classical Music Album Award 2012 by the Independent Phonographic Union. The third volume of the Cobra label comes before the recording, with pianist Javier Perianes, of the quintets for piano and strings of Turina Y Granados that will appear next November in harmonia mundi.

The presentation of "Frei aber Einsam" will take place on the day 17 June at 20 hours at the Cerralbo Museum, where El Cuarteto Quiroga has its current residence.

This CD is not just another recording. It is the story of a fascinating journey. The lonely journey of a man who was able to preserve his identity and his artistic freedom by taking the string quartet genre - after a hard personal battle and a long pilgrimage - to the summit from where you can admire the heritage of Beethoven, Mozart Y Haydn (whose manuscripts of Opus 20 belonged to Brahms personal library), the musical substrate of the German folk tradition and, at the time, as well, spot the extraordinary revolution of the Second Vienna School, what was to come then.

As pointed out Helena Poggio, Cellist of the Quiroga Quartet, in the booklet of the new CD, Free but lonely (Free but lonely) was the motto that Brahms shared with his good friend Joseph joachim, on whom the composition of his second quartet is based. The first letters of this emblem (F-A-E) correspond, in the German music nomenclature, with the notes "fa-la-mi", reason with which the first sentence of the first movement opens, that we also find as a matrix of the third and fourth, and hidden, between lines, In a second.

We can often identify in the melancholic character of his music the feeling of this currency that Brahms came to take as his own., Well, he was fighting practically alone, most of his life, in defense of his work, of his aesthetic conception and chamber music. He always remained true to himself and never wanted to accept a path marked by fashions or trends., making prevail, above all, your freedom and independence. He never regretted his position despite the suffering it could cause him. In his own words: "For me, f.a.e. (free but lonely) has stood as a symbol, and despite everything, I can very well bless it ".

Resident quartet of the Palatine Stradivarius collection of the Royal Palace

The Cuarteto Quiroga, recently appointed resident group in charge of the palatine collection of the Stradivarius of the Madrid's royal palace, It is considered one of the most unique groups and assets of the new European generation. Internationally recognized among critics and audiences for the strong personality of their character as a group and for their bold and innovative interpretations, in addition to its work in search of new audiences and meetings in alternative settings such as factories and hospitals.

In 2007 received the "Critical Eye" Award given annually by Radio Nacional de España.

Deeply involved with the teaching of chamber music, They are teachers every summer in the Llanes International Music Course, responsible for the Chair of String Quartet of the Superior Conservatory of Music of Aragon and regularly invited to give master classes to the Young National Orchestra of Spain and to conservatories and universities in Spain, Holland, Sweden, Colombia, US and Arab Emirates.