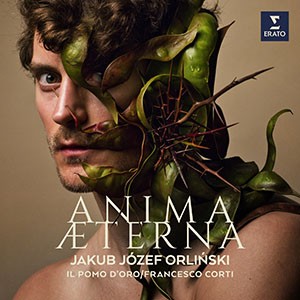 eternal life, is the new adventure of the countertenor of Polish origin in which he explores sacred arias and motets of the 18th century. Follow the line of Anima Sacra, published in 2018, announcing the arrival of Jakub Józef Orliński, as described by Gramophone magazine, "A voice with a great future".

Like Sacred soul, the new album includes several world premiere recordings. Jakub is joined again by the instrumentalists of Tomato, directed this time by Francesco Corti. An innovation that we find in this new album is the participation of the choir Il Pomo D´Oro and the presence of another vocal soloist; the captivating soprano Fatma Said, whose recent debut album El Nour caused a worldwide sensation. Fatma se une a Orliński para el brillante motete "I was glad’ by the bohemian composer Jan Dismas Zelenka. The chorus contributes to another motet, and to one of the world premiere recordings, “Boys, give praise, praise the Lord!” by the Neapolitan composer Gennaro Manna.

"Anima Aeterna intends to be a continuation of Anima Sacra”, dice Jakub Józef Orliński. "It offers a kind of dialogue, a conversation between the two programs. I always wanted my solo albums to be artistic statements and feature ideas, telling big and small stories, creating connections and arguments through your programs”.

To conceive and devise this second Soul, Orliński returned to work with the multi-talented musician and musicologist Yannis François. Besides Zelenka (also represented by a virtuous motet solo, ‘Barbara are effera’, composed for the famous castrato Domenico Annibali) and Manna, offers works by Handel, Fux and two composers who, as Manna, they are 'rediscoveries': Francisco António de Almeida and Bartolomeo Nucci. In fact, Yannis François believes that Nucci's aria, from an oratorio on the story of David and Goliath, constitutes the first appearance of the Tuscan composer in the entire recorded catalog. Anima Aeterna LP edition includes bonus track and world premiere recording: “Thank you” by the Neapolitan composer Davide Perez.

"One more time, this album is not so much about the religious side of the show's works as about the emotions they contain ", Orliński continues, “And of the different instruments and voices that present. You can find compositions with totally different orchestrations: with solo trumpet, fiddle, fagot, cello, organ and viola di bordone [a type of viola also known as baryton]. There is also a full motet with choir and the wonderful soprano, Fatma Said.

“All this shows even more the nuances and colors that are heard in the sacred music of the baroque and, the most important, how can they touch people's souls, even today. Eternal life means “eternal soul”, that for me means nature. Something so strong and durable … Something so vital, wild and dangerous, but also so calm, fascinating and healing “.