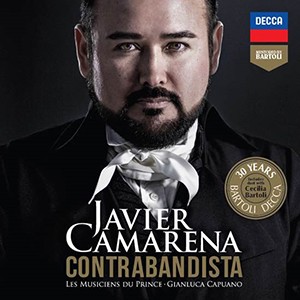 Produced by Cecilia Bartoli Music Foundation and published by Decca, This launch marks the beginning of the new series ‘Mentored by Bartoli’, a sub-label Decca Classics which aims to support and monitor new recordings by exceptional artists.

In "Smuggler"Camarena takes the listener on a journey through the most fascinating works of García, including three recordings of world premiere, "Gypsy face of my soul" of his opera Gypsy for love; "You always dear whose picture" of Death of Tasso; And "Ô ciel! my fury just how to punish the transport?" from Florestan or the Council of Ten, along with arias Rossini y Zingarelli. Bartoli participates in the stunning duet Rossini's Armida "Amor … (mighty name!)”, which appeared in the concert program García in London 1824. They orchestra of period instruments come together 'Les Musiciens du Prince – Monaco’ and the conductor Gianluca Capuano.

Javier Camarena
Javier Camarena is leaving its mark on the opera houses around the world, winning praise for his voice “infectious” (New Yorker) and his performances “brilliantly eloquent” (The Times). Considered the pre-eminent specialist of his generation in Mozart and bel canto, in 2014, He became the third tenor in history afford to repeat arias at the Metropolitan Opera (the other two are Luciano Pavarotti and Juan Diego Flórez) Biso when the spectacular aria "If ritrovarla giuro io" Ramiro in La Cinderella Rossini.

“It is an honor to present my debut solo album on Decca Classics with Cecilia Bartoli. Work with her, either on stage or in the studio, It is always an artistically rewarding and inspiring experience. I am delighted that this project enlighten the life and music of this fascinating historical figure, Manuel García “.

About Manuel Garcia and the new album

Born the son of a cobbler in Seville 1775, the story of Manuel Garcia captured the imagination of his contemporaries. He was a handsome upstart and quite mischievous, whose talent and charisma made him famous worldwide. As one of the most brilliant tenors of his time, He was instrumental in establishing Mozart and Rossini as pillars of popular operatic repertoire. as a composer, He established the Spanish opera as a separate genre and helped the music of his native country to enter the European culture in general. And as theater manager, He contributed to the culture of opera as an art form in the US and Mexico. He was also passionate about giving singers a complete musical education and strong technical voice. Garcia's daughter, Maria Malibran, He became one of the most famous opera singers of the nineteenth century, and the subject of one of the best selling albums of Cecilia Bartoli, ‘Maria’.

'I who I am smuggler’, (aria included on this album and title thereto), is one of the most famous works of García was The poet calculista, an opera for a singer (García) about a poor poet who can not earn enough money to buy food. One of the highlights, became immensely popular in the nineteenth century thanks to its catchy melody, Spanish and rhythms melismata. Even inspired composers like Berlioz, Bizet's flour y.

Cecilia Bartoli name means opening new paths, innovation from tradition, revive the forgotten music. The idea behind the Music Foundation that bears his name is to bring classical music to a wider audience and collaborate with new talents. In this way, New impulses are given to one of the fundamental pillars of our culture, classical music.

This album launches a series of recordings produced by Cecilia Bartoli – Music Foundation and published by Decca, under a new label “Decca – Mentored by Bartoli”. With this project, the Foundation aims to support and monitor new recordings by exceptional artists. The production of this album combines support for an extremely talented tenor, Javier Camarena, with the investigation of an important figure in the history of music, Manuel García. It also benefits from the brilliant collaboration of the newly created “Les Musiciens du Prince – Monaco”, a jewel among the period instrument orchestras, and conductor Gianluca Capuano.

This project is a testament to the passion of Cecilia Bartoli music at the highest level and the desire to support a new generation of artists. While celebrating its 30 years with Decca, Bartoli looks to the past, present and future, and consolidates its position as one of the most amazing artists of his generation.

[4] GARCÍA: You whose picture still expensive (Death of Tasso)*

[5] ZINGARELLI: From there dell'ombre kingdoms, and death (Romeo and Juliet)

[7] GARCÍA: O heaven ! my fury just how to punish the transport? (Florestan or the Council of Ten)*

[8] ROSSINI: Cease to resist more (The Barber of Seville)

[9] GARCÍA: I will form my plan carefully (The poet calculista)

[10] ROSSINI: If it is faithful every hour I will never ... What joy (Ricciardo and Zoraida)