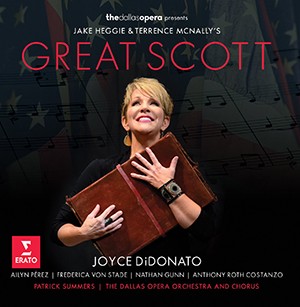 In January 2018 Warner Classics publica “Great Scott”, Jake Heggie's opera written for Joyce DiDonato and starring herself. It was recorded at the Dallas Opera during its premiere, in autumn 2015.

A Great Scott, the mezzo-soprano born in Kansas and one of the singers of classical music's most beloved, He gives life to a character designed specifically for her. The play revolves around Arden Scott, a star of the opera which is the linchpin of what Fred Plotkin of WQXR, the classical music station most important US, He defined as "an exciting and musically brilliant work" that "should enter into the daily repertoire as are already the two previous masterpieces of Heggie: Dead Man Walking y Moby-Dick”.

Jake Jeggie, described as the most important opera composer of America, elected the playwright Terence McNally known as librettist for Great Scott. The two previously collaborated on the exciting Dead Man Walking, which has become a consolidated since its debut in the year work 2000. DiDonato represented the central role in the New York Opera 2002 and it will make, once again, on the stages of London and Madrid in January and February 2018, coinciding with the release of new album.
In Madrid, the Teatro Real opera will reach the 26 January will be performed six nights: the days 26, 29 Y 31 from January, 3, 6 Y 9 February.

"I think the best way to describe Great Scott is like a love letter to the world, generous and melodic, about opera and art " – Joyce DiDonato said in an interview with National Public Radio - "Unify many different areas. It's really a current story because it raises questions for all who love the arts and those who contribute to our society”.

The cast of Great Scott also it includes artists of the stature of Frederica von Stade, a singer who has always qualified as Joyce modélica, the artistic director Opera America; Nathan Gunn como Sid, the architect who was a former lover of Arden; Ailyn Pérez as an ambitious young soprano; Michael Mayes as a selfish Anthony Roth Costanzo baritone and inspired as stage director. The conductor is Patrick Summer and exceptional audio recording comes from within the production stage director Jack O'Brien.