The Surprises of Love, Rameau 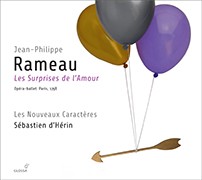 The contagious energy and exhilarating musicality of Sébastien d’Hérin and Les Nouveaux Caractères make their debut at Glossa with a first-rate operatic dish, never before recorded in its entirety: The Surprises of Love, opera-ballet by Jean-Philippe Rameau in tres acts or independent entries, released in 1748 and then subjected to several revisions. Work of the splendid maturity of the composer, dates from the time when, at last, was employed at court.
Three stories of a love that faces aggression (The Abduction of Adonis), indifference (The Enchanted Lyre) and the drink (Anacréon) are staged in this captivating production through a mix of arias, dialogues and duets with the full panoply of Rameau's orchestral genius – including war and dream scenes, dances and storm effects.
Although newly created, New Characters (based in Lyon) has a stable group of artists who, around the exquisite harpsichordist and conductor Sébastien d’Hérin, presents here vocal soloists of the stature of Karine Deshayes, Caroline Mutel, Anders Dahlin, Virginie Pochon and Jean-Sebastien Bou, responsible for portraying a whole series of mythological characters such as Cupid himself, to his mother Venus, to the huntress Diana, to the mermaid Parthenope, to the muse Urania or the drinker poet Anacreon, all of this in a highly inventive score that featured none other than Madame de Pompadour in the cast of its premiere.