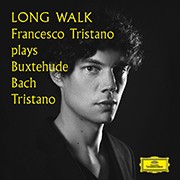 With a title referring to the journey undertaken in 1705 by the German composer, Johann Sebastian Bach also to meet the Danish organist and composer, Dietrich Buxtehude; Tristano first opposed parts, around the center composition and album artwork magna Buxtehude, the aria "La Capricciosa" getting thus creating a magnificent tribute to the not so known Danish author whose influence would be defining the work of the famous Bach.
The same Tristano personal proposal interprets two of his compositions "Ground Bass" and "Long Walk" based on a canon written by Bach and in the words of the Luxembourg interpreter itself is a precursor to modern sequential music, resulting in two issues they are identified among the most cadente Chicago House and Detroit Techno incisor.
Popularly known for his collaborations with artists like Carl Craig, Moritz von Oswald and Mexican Fernando Corona "Murcof", coupled with its polished piano virtuosity in the most prestigious venues in the world, They make this material a reference for any music enthusiast and surely future follower of Francesco Tristano. (Roman Farid Saavedra).