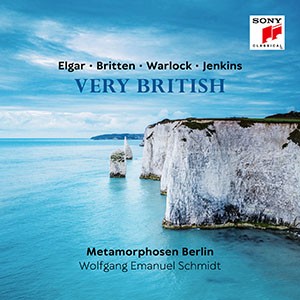 La Kammerphilharmonie Metamorphosen Berlin led by cellist Wolfgang Emanuel Schmidt has just released his new album on the Sony Classical label under the title “Very British”, with string music “made in Great Britain”. After the unanimous applause of the specialized critics for his previous recordings with works by Josef Suk, Victor Herbert, Dvorak y Tchaikovsky, on his third album recorded at the well-known Teldex Studio in Berlin, the German ensemble offers us their reading of the English romantic repertoire for string orchestra, with well-known works by British composers: Serenade for strings, On. 20 de Edward Elgar (1857-1934), Simple Symphony, On. 4 Benjamin Britten (1913-1976), Capriol Suite de Peter Warlock (1894-1930), inspired by six renaissance dances published in 1588, Y Palladio de Karl Jenkins (*1944), originally composed in 1993 for a diamond ad.

As in his previous albums with Metamorphosen Berlin (Inspiration, Serenade), Wolfgang Emanuel Schmidt includes on this album his own transcriptions for cello (in the vein of legendary soloists such as the violinist Jascha Heifetz or the cellist Gregor Piatigorsky) Y, this time, presents in world premiere its adaptation for cello as a suite of 9 pieces by Elgar, as Romance, On 1, Adieu, Hi love, On. 12 O The Capricious, On. 17, in which he exhibits his usual virtuosity and impeccable musicality.

"The album" Very British "is planned as if it were a classical concert, with its usual structure: an opening, a solo work, the main work of the evening (a symphony), a striking work to finish and, how could it be otherwise, a virtuous tip to finish ", points out Wolfgang Emanuel Schmidt, that invites the listener to understand the album as a set of 23 Delicacies musicals".

Metamorphosen Berlin was founded in 2010 by cellist and conductor Wolfgang Emanuel Schmidt (discípulo de Rostropovich y profesor de violonchelo en the University of Music “Franz Liszt” de Weimar y the University of the Arts de Berlin), and the violinist Indira Koch (Disciple of Menuhin and concertmaster since 1999 de la Deutsche Oper Berlin). Based in the German capital, is made up of prominent chamber musicians, the first lecterns of leading German symphony orchestras, and first prizes of international competitions of international prestige such as the Moscow Tchaikovsky Competition, the Lutoslawski International Competition in Warsaw and the Queen Elizabeth Competition in Brussels.