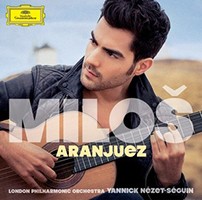 Miloš Karadaglić notes that “this recording is my personal tribute to the music and musicians who changed the course of classical guitar history”.
He Aranjuez's concert it was written by Joaquín Rodrigo for the guitarist Regino Sainz de la Maza and very soon it became not only the most famous Spanish guitar concert, but also the most famous guitar concert of all time.
He considers that the Aranjuez Concert is like “the holy grail of the guitar repertoire and an inexhaustible source of inspiration. The first and last movements sparkle with energy and rhythm. They paint the landscape of nature, happiness and love. The second legendary move takes us to a different reality, where emotions overflow and a chain becomes a voice”.

For the recording of the new Aranjuez album, Miloš has been accompanied by the London Philharmonic Orchestra under the baton of Yannick Nézet- Seguin.