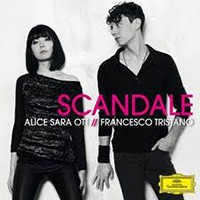 Alice Sara-Ott Y Francesco Tristano present their recent album in concert for German Grammophon, Scandal, in which the two pianists pay homage to one of the most charismatic and fundamental figures of Russian dance, Sergei Diaghilev, businessman and godfather of some of the most important ballets of the beginning of the last century, playing in duet some of the ballets with which the visionary impresario reaped one scandal after another while establishing the conditions for revolutionary art. In his journey through immortal pieces that have been danced by the most important dance soloists, works by Debussy come together, Ravel o Igor Stravinsky, with whom the Russian businessman collaborated intensively. The Rite of Spring, Bolero, Three nocturnes… melodies that everyone associates with the aerial drawings of so many ballets, now embodied in two young keyboards.