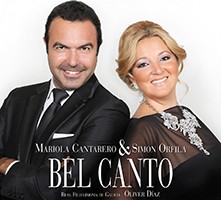 He 15 de marzo the soprano Mariola Cantarero and bass-baritone Simon Orfila will present their album Nice singing in Minorca, specifically in the Main Theater of Maó. The disc, which it was launched last December, It includes arias and duets from operas mozartianas (Don Giovanni), rossinianas (Semiramide and The Barber of Seville) and donizettianas (Lucrezia Borgia, Anna Bolena y L’elisir d’amore) in which Cantarero and Orfila prove to be in "splendid form" according to the famous Spanish tenor Pedro Lavirgen in a text that is included in the disc, who explains that it is a work "that shows that there is a promotion of young Spanish singers with a brilliant international projection".

The idea was born a couple of years ago and materialized in the Galicia Auditorium in Santiago de Compostela, where both joined their voices to revise together an important part of the repertoire of both stars of Spanish opera and zarzuela. The Bel Canto album was born from the recording of that concert., a program that they are taking on tour through various stages in the country and that they have already presented in Malaga and Granada.

The disc, now on sale (Fnac, The English Court and Amazon), has been placed among the best sellers in the field of classical music.

Mariola Cantarero and Simón Orfila are two of the most important names of the Hispanic lyrical quarry; born and musically trained in Spanish conservatories, both have been developing an important international career. Born in Granada, Cantarero debuted at the Teatro Comunale de Genoa and has been directed by masters such as Mehta, Zedda, López Cobos or Abbado on stages such as the Teatro Real and Teatro de La Zarzuela in Madrid or the Gran Teatre del Liceu in Barcelona, as well as in the main Spanish and Italian seasons and festivals (Pésaro, Trieste, Florence, Genoa, Roma, Bologna, Naples), as well as in Zurich, Amsterdam, Bucharest,
Detroit, Strasbourg, Lausanne, Santiago de Chile, Seoul or Shanghai. She has been awarded in different international competitions. His repertoire includes titles by Bellini, Donizetti, Rossini, Verdi, Mozart o Johann Strauss. In the field of zarzuela and Spanish opera, he has performed Pan y Toros, Doña Francisquita, Luisa Fernanda, The duo of La Africana or Marina.