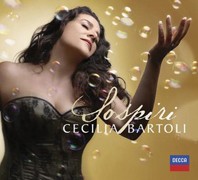 After listening to Sospiri, It is not difficult to realize that the arias that make up this CD are Cecilia Bartoli's favorites.. Now he surprises us with a compilation full of sensitivity. If his bravura and coloratura arias are spectacular, no less spectacular are these dramatic and delicate arias, as are the ones that make up this new work.
The ability for the nuances of that Mediterranean and extensive voice, that displays a varied repertoire full of delicate subtleties such as Ombra mai fu, from Handel's opera Serse, Leave the Thorn, pick the rose, de Il triunfo del Templo and Disillanno o That good shepherd am me, by Antonio Caldara.
And representing the purest bel canto, obras como You who know, from the opera Le nozze di Figaro by Mozart; a voice just now, de The Barber of Seville de Rossini or Casta diva, Bellini's tomb. Works all of them that masters to perfection. The religious pieces on the second CD, overwhelmed by the containment of its execution and consistent pianos that drive a winged and very light voice that floats.
Cerbo in bosco from the opera Medo is also incorporated in this work, of the composer Leonardo Vinci. This work was one of the discoveries he made to us in his previous work, sacrifice, because each of his works are, Besides, an interesting and hard research work. And as, in Sospiri surprises us with an unprecedented gift, the first recording of Rossini's Stabat Mater. This work was commissioned by the Spanish clergyman Manuel Fernández Varela in 1831. Rossini, that in his last years he barely composed, accepted the commission with the only condition that it not be engraved. It was only to be performed at private concerts. Now we can enjoy it privately at home.
Accompanying Cecilia Bartoli in some of the arias, appear in this work Bryan Terfel, Juan Diego Florez or Luciano Pavarotti.
Sospiri can be found in Prestige Edition, formed by two CDs (with 21 works) accompanied by book. On the second CD of this edition you will find an extraordinary selection of sacred works, el Stabat Mater, already alluded to; the Requiem of Duruflé and Fauré, among others. And in standard version, composed of a CD (with 13 works).
Cecilia Bartoli
Mozart, Haendel, Bellini, Rossini, Vivaldi
A Bartoli Retrospective –
Two Decades on Decca of Service to Art
Decca