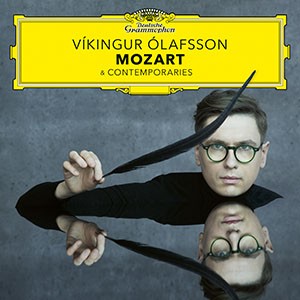 After the global successes of Philip Glass · Piano Works, Johann Sebastian Bach, Debussy · Rameau and Debussy · Rameau Reflections (more of 225 million streams to date and more than 320.000 albums sold), the multi-award-winning pianist Víkingur Ólafsson now focuses his attention on the music of MOZART. Ólafsson presents some of his favorite Mozart keyboard works in the company of pieces from a selection of prominent contemporaries. By juxtaposing works by Mozart, Haydn, C. P. E. Bach and the rarely engraved Galuppi and Cimarosa, Mozart & Contemporaries dispels the image of Mozart as the angelic and prodigious scholar stupid, presenting, instead, to a mature composer by means of music composed mostly during the decade of 1780: a resourceful adult, who works hard and who had already known adversity. Everything is cleverly assembled by Ólafsson's very personal programming, which is always an invitation to reflection.

Ólafsson comment: “This decade of the life and art of Mozart seems infinitely fascinating to me. Mozart was not just a composer and I have the feeling that, when he wrote for himself as a piano virtuoso, he allowed himself more than ever that sublime playful character that is at the very center of his originality and inventiveness. This is the time when Mozart was not only perfecting the classical tradition, but subverting it in a subtle way. The shadows are darker; the nuances and ambiguities, deeper".

Carl Philipp Emanuel Bach (1714-1788); Joseph Haydn (1732-1809); Baldassare Galuppi (1706-1785) Y Domenico Cimarosa (1749-1801): Perhaps all four provide an opportunity to calibrate the contemporary ear to ideas, the dominant styles and tastes of the time ", comment Ólafsson. “I trust that this particular context, a mixture of the famous and the hidden, may slightly modify our psychological adjustment, leaving aside part of the baggage that we all instinctively incorporate into Mozart's music. This is, in any case, what I set out to do to myself: approach even the best-known works of Mozart with the same freedom and childlike enthusiasm that I felt when discovering the rare and astonishingly lyrical works of composers like Galuppi and Cimarosa ".

Mozart: a bird that flies free

Mozart & Contemporaries offers us a fascinating snapshot of a decade in which changes were abuzz, composers were constantly experimenting and Mozart was writing such visionary pieces as the Sonata in C minor K. 457. The album - the pianist's fourth for Deutsche Grammophon - also includes Ólafsson's own transcripts: evocative arrangements of two sonatas by Cimarosa, plus a masterful transcription for piano solo of the great Adagio in E flat major from the K string quintet. 516 Mozart. To close the disc, the Adagio in B minor K. 540 of Mozart flows, after a smooth transition, in Franz Liszt's transcription of the motet Ave verum corpus, composed by Mozart in his last year of life. The ascent of the vocal lines to the higher registers of the piano is seen by Ólafsson as the representation of a final sensation of death and transfiguration.

"When I play Mozart, I feel like I'm getting to know myself as a musician. I get to know aspects that I did not know before. He seems to reflect in the music your most intimate being. " Víkingur Ólafsson

Víkingur Ólafsson made an unforgettable impact with the publication of his first three albums, Philip Glass · Piano Works (2017), Johann Sebastian Bach (2018) Y Debussy · Rameau (2020) en Deutsche Grammophon, label of which he is an exclusive recording artist. The project Debussy · Rameau, what made him Daily Telegraph define it as "the new superstar of classical piano", has reached almost the figure of one hundred thousand records sold and has exceeded the 75 million streams, which has brought the total number of streams of Ólafsson's music to more than 225 millions.

Ólafsson's multiple awards include the Opus Klassik for the best Instrumental Recording to solo (piano) for two consecutive years (2019, 2020), Album of the Year at the LA Awards BBC Music Magazine in 2019 and Artist of the Year magazine Gramophone in 2019. The New York Times rated it, meanwhile, of “Glenn Gould de Islandia”.

Only in 2020 made a series of eight broadcasts on Icelandic radio; hosted his own primetime TV series in Iceland, call Musical bites; and created his own three-part series for BBC Radio 3, Transcribe, To transform. During confinement, Ólafsson was also the artist-in-residence for three months on BBC Radio's teaches art program 4, Front Row (First row), broadcasting weekly recitals live from a deserted Harpa concert hall in Reykjavik, that were heard by millions of listeners around the world.

Víkingur Ólafsson will make his debut at the BBC Proms on 14 August and will play Mozart & Contemporaries at the International Piano Series at London's Southbank Center on 2 October 2021.