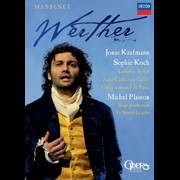 DVD recording of Kaufmann's successful debut, one of the most versatile and appreciated tenors on the current scene, in the role of Werther at the Opera National de Paris in January 2010. The French cast that shares the stage with him (Sofie Koch and Ludovic Tézier) it's excellent. The production is directed by Maestro Michel Plasson, great connoisseur and defender of the French repertoire.
Werther, Massenet
Michel Plasson
Jonas Kaufmann
Sophie Koch
Decca