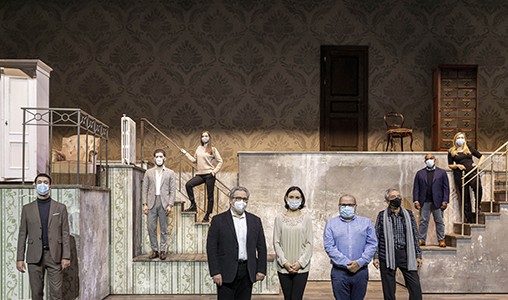 The Palau de les Arts brings together Carlo Rizzi, in musical direction, y a Laurent Pelly, in the stage direction, for 'Cinderella', Rossini, that will be released this next 10 December in the Main Hall.

Les Arts recovers Rossini's comic repertoire in its programming with this new montage, co-produced with the Dutch National Opera and the Grand Théâtre de Genève, in which some of the most prominent experts in the work of the composer of Pesaro are cited, as explained by Jesús Iglesias Noriega today in his presentation.

On the podium returns to Les Arts Carlo Rizzi, one of the most prominent opera directors of recent years. Invited by the main theaters and festivals, Rizzi made his debut with the Choir of the Generalitat and the Orchestra of the Valencian Community (OCV) in 2013 with Verdi's 'Requiem'.

Carlo Rizzi has recordado, in this sense, the ductility and capacity of the OCV to tackle this work by Rossini, which is considered as his most appreciated title, and represented, después de 'The Barber of Seville'. The Milanese master, Likewise, has underlined the need for a great cast in an opera in which joint numbers take center stage.

Emerging and consolidated Rossinian interpreters make up the cast that will perform ‘La Cenerentola’ from 10 al 23 December at Les Arts, as Iglesias Noriega has pointed out. The mezzo-soprano ascendant anna Goryachova (Angelina) leads the cast of the production in its debut in Valencia. Lawrence Brownlee, become one of the main tenors of ‘bel canto’, plays the role of Don Ramiro.

For the role of Don Magnifico he will sing, for the first time in the Main Hall, the veteran bass-baritone from Zaragoza Carlos Chausson, considered one of the great Rossini specialists on the international scene. Beside, two emerging performers, the Catalan baritone Carles Pachón (Dandini) and the italian bass Riccardo Fassi (Gold wings) they close the deal, in which the interpreters of the Center de Perfeccinment also participate Larisa Stefan (Clorinda) Y Evgeniya Khomutova (Tisbe).

The sought-after French opera and theater director, Laurent Pelly, performs his first work for Les Arts with this title, what, as Iglesias Noriega has qualified, is part of the commitment to introduce new aesthetics in the programming by the hand of the main names of the current scene.

Pelly, recognized for the careful dramaturgy of his works, he is also the costume designer for this production, with scenery by Chantal Thomas, featuring Jean-Jacques Delmotte as Associate Costume Designer and Duane Schuler as Lighting Design. As he explains himself, in his ‘Cenerentola’ he proposes a narrative from a dream point of view, where everything is a product of the protagonist's mind. “Little by little, Angelina's dream comes true to reach the end of the show, in which we return to the starting point ".

At montage performances in Amsterdam and Geneva, Audiences and critics have praised both the dynamism and fine sense of humor of Pelly's staging, without forgetting the elegance of the aesthetic approach, with a predominant phosphorescent pink to embody the magic of the dream of 'La

Cinderella'.
Parallel activities
With the purpose of offering new meeting spaces for music and other artistic disciplines, this Friday 4 from December, at 7:00 p.m. in the Master Classroom, ‘Berklee a les Arts0 presents Mediterráneas’, a free proposal open to the general public, with prior reservation. This time, Berklee students invite us to reflect on different themes inspired by ‘La Cenerentola’.

On the other hand, next Monday, the Main Arts Hall will host the first ‘Preview up to 28’ of the season, an activity for which, for the first time, advance sale seats have been exhausted. A fact that, as Jesús Iglesias Noriega has highlighted, highlights both the interest of the young public for the lyric and the image of Les Arts "as a space for all audiences".

Among the activities around ‘La Cenerentola’, on Wednesday, 9 from December, the Master Classroom will host a free colloquium of the cycle ‘Perspectives’, carried out in collaboration with Amics de l’Òpera i de les Arts de la Comunidad Valenciana, in which Carlo Rizzi, Carlos Chausson and Carles Pachón will talk about this production.

'Cinderella'
Gioachino Rossini needed only three weeks to write the music for ‘La Cenerentola’. The piece was born as a commission from the young composer by the Teatro Valle de Roma after the success of ‘Il barbiere di Siviglia’. Jacopo Ferretti is the author of the text, based on the fairy tale ‘Cinderella’, by Charles Perrault and in the librettos by Charles-Guillaume Étienne and Francesco Fiorini.

It was Rossini himself who directed the premiere of the play on 25 of January of 1817. Despite the cold reception of the first performances, the work quickly achieved great popularity both in Italy and abroad. In this variation on the traditional story of Perrault, wicked stepmother is replaced by stepfather, Mr. Magnificent, and instead of the Fairy godmother Alidoro appears, philosopher and tutor to the prince. Is a
bracelet and not the popular crystal shoe that reveals Angelina's true identity, Cinderella.