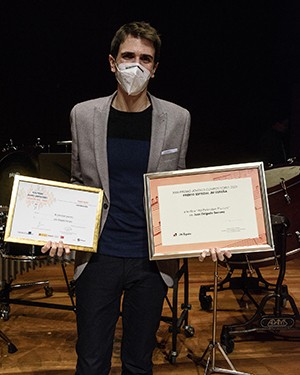 The man from Salamanca has obtained the first prize ‘Xavier Montsalvatge’, endowed with 6.000 €, for his work To sue rain and also becomes resident composer of the Musical Youth Music Network of Spain during the season 2021-2022. “Listening to my work live in an environment like this has been a huge satisfaction, and being the winner makes me happy and gives me the impetus to continue making premieres and composing ", Delgado has declared.

“A composition of this type requires a lot of equipment working together. It is a treasure to hold these competitions because as a young composer it is very difficult to premiere works at this level”, thanks. On To rain,, a work that has won the award, Juan Delgado has explained: "I did a fieldwork about the prayers in the province of Segovia at the end of the 20th century to ask for rain. These practices are represented in the composition: from prayer until the clouds drop the rain”.

Juan Jose Solana, President of the SGAE Foundation, presented the first prize to the composer and recalled the quality of the recognition: "This contest shows the work that is being done in Spain among young people, with an avant-garde character and very disparate works, daring, looking for new sound trends. We are very proud to be able to do it, more in these times of Covid and we appreciate the public response

full Honors
In this way, the complete list of winners of the XXXI edition of the Young Composers Award SGAE Foundation - CNDM 2019 It is configured as follows: Alejandro Cano Palomo (Fuengirola-Malaga, 1992) He won the second "Carmelo Alonso Bernaola" award (3.000 euros) with his work The shape of the stars , Light Martin (Quarter of Poblet-Valencia, 2000) He won the third prize "Francisco Guerrero Marín" (1.5000 euros) with its part Disintegrated strata, while Pilar Miralles (Almería, 1997) received honorable mention “Juan Crisostomo Arriaga” (1.200 euros) For his job Deconstruction of a reference. All of them have less than 35 year old.

The group ENIGMA, under the direction of Asier Puga, it released the four compositions yesterday, Series in the cycle 20/21 from the National Center for Musical Diffusion-CNDM at the Museo Nacional Centro de Arte Reina Sofía. further, and as in every edition, SGAE Foundation will release a promotional album which will bring together the four finalists of the contest, in order to contribute to its further promotion and dissemination. The judge, which was composed by the composers Julián Ávila Sausor, Juan Cruz Guevara, Alejandra Hernandez, Israel David Martínez and Sonia Megías, these works has selected a total of 49 presented in competition.

​​​​​​Resident Composer Music Network
The first prize is also joined by the appointment of Delgado as Resident Composer of the Musical Youth Music Network of Spain. Thus, the man from Salamanca receives the order of three works of chamber music that will be premiered and performed within the Red de Músicas circuit during the 2021–2022 season, granting 1.000 euros for each piece.

About the award
The SGAE Foundation and the National Center for Musical Diffusion-CNDM annually announce this award with the purpose of stimulating the creation in the field of contemporary classical music among young creators of up to 35 years, contribute to social development and understanding of new languages, trends and modes of musical expression. Created in 1987 by SGAE, It has become one of the most important events of its kind, by their organization and thoroughness, the prestige of the performers and participants juries.

Through its thirty editions, The award has served as a promotional showcase in the professional beginnings of some of the contemporary authors who currently enjoy greater recognition and whose works are common on international circuits dedicated to current music.

Among the winners of previous editions include already established names in the panorama of the current composition, with international careers that show the good health of the Spanish musical creation: Charles Augustine, Mauricio Sotelo, José María Sánchez-Verdú, Jesús Rueda, Jesus Torres, Pilar Jurado, Gabriel Erkoreka, Ramon Humet, Juan Cruz Guevara, Jesus Navarro, Oliver Rappoport or Nuria Núñez, among many others, They have been involved in this indispensable appointment in the section of the ensemble composition nationally.
​​​
About the winner
Juan Delgado Serrano (Salamanca, 1985) studied at the Conservatorio Superior de Música de Castilla y León Composition and Ethnomusicology, discipline for which he obtained the End of Degree Honor Award. He completed his training with a degree in Audio Engineering and Music Production (SAE Institute/Middlesex University) and specialized in jazz and modern piano by the pianist Germán Kucich (Creative Music School). parallel, He expanded his studies in Ethnomusicology with a degree in Social and Cultural Anthropology (UNIT). As an author he has developed a varied compositional trajectory in contemporary music, music for audiovisual media and modern music. He has served as musical director as well as music producer, arranger, sound designer, sound engineer and studio musician with artists like Eugenio Muñoz, Bobby Martínez, Jorge Pardo, Rosendo, Celtas Cortos or Rodrigo Mercado, as well as with record labels such as Warner Music or Elephant Records. In the field of contemporary music, his compositional work is characterized by the use of eclectic instrumental templates and extended instrumental techniques, incorporating electronic resources and live electronics procedures, the panoramic treatment of sound sources and the design of enveloping sound environments, the confluence of sound with other sensory stimuli, cultural intertextuality, poetic sensitivity, intimacy and the cult of silence.

About 'to sue rain'
In the author's own words, To sue rain recreates the phenomenon of peasant propitiatory practices of requesting rains that, until the sixties and seventies, they were still being celebrated in a generalized way, both on official spring dates and on special drought occasions, in most of the Castilian towns of the current "empty Spain": rogative Comunitarias acompañadas of praying for rain,, litanic responsory chants and ritual blessings of fields, immersion rites of objects with mystical attributions, popular propitiatory songs, etc. Ad petendam pluviam immerses the listener in an intimate and evocative atmosphere in which the drought situation in the countryside is recreated, the lament of the farmers, the gaze of women and men begging the sky and the gradual and overwhelming advent of the rain. Fruit of my ethnomusicological research in the province of Segovia, which will be published in 2021 (Water we ask you), This personal tribute to the memory of those elderly farmers who, with her face flushed and tears welling up in her pupils, they talked and sang, generously undressing his memories, their believes, their values, your faith and, essentially, their lives.