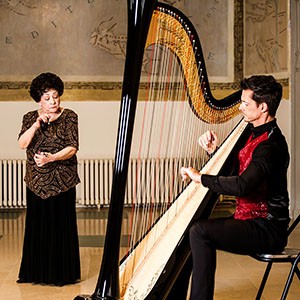 If there is someone who deserves everything, in the artistic and the personal, that is Lucero Tena. This is how his fellow artists know, like the immense harpist Xavier de Maistre who will accompany her at the next concert Sunday 23 of May (18h00), and also the public, who adores her without conditions. Tickets for this long-awaited recital of the Cycle of Concerts of the Teatro de la Zarzuela is it so sold out for days.

The appointment will do, as for years are all his public appearances, from exciting tribute to a unique life and career, difficult to emulate even from afar.

Lucero Tena and Xavier de Maistre will offer some of the most beautiful pages of Spanish music. The passionate and bizarre ringing of her castanets, accompanied by the sweet and evocative sound of his harp, they will revive in the Coliseum of the Plazuela de Jovellanos essential works of the Father Soler, Mateo Pérez de Albéniz, Francisco Tárrega, Isaac Albeniz, Enrique Granados, Manuel de Falla or Jesús Guridi.

4 hours before opening doors, there was already a crowd waiting

Behind the last year's success, he Teatro de la Zarzuela repeated concert in the Plaza Mayor of Madrid, in an event that exceeded any expectation. About 8.000 people They were enthusiastic about the initiative of the Theater of Jovellanos to plazuela bring Spanish music a street people.

The show was yesterday Sunday, 13 of May, under the title 'The zarzuela is at', and the public ended surrendered to the voices of soprano Ainhoa ​​Arteta, the tenor José Luis Sola and baritone José Antonio López, as well as the expertise at the touch of castanets Lucero Tena. The concert was directed by Oliver Diaz -Head of musical theatre- in front of the Community of Madrid Orchestra -owner of the coliseum–, and formed prominent part of the program of parties San Isidro, patron of the city, as well as the commemoration of the 400 years Square.

Melodies 'The revoltosa' Ruperto Chapí, 'Francisquita Dona' Amadeo Vives, 'The party' Francisco Alonso, The barberillo Lavapies' of Francisco Asenjo Barbieri, 'Water, sugars and brandy ' Federico Chueca, The village ' Jesus Guridi, 'Luisa Fernanda' Federico Torroba or The Jewish boy ' Paul Moon, They put the soundtrack to a night designed by and for the public, who thanked him with undisguised enthusiasm.