Cordovan tenor returns to the stage for the first time this year Pablo Garcia-Lopez, to participate in the Lyric Season 2020/21 of the Baluarte Foundation in the coming days 5 Y 7 February.

Will play the role of Edmondo, the music teacher, in a semi-staged version of the opera Manon Lescaut, with the direction of Susana Gómez. García-López joins the cast led by Berna Perles (Manon Lescaut) and Walter Fraccaro (Renato des Grieux), which also includes the Navarra Symphony Orchestra and the AGAO Lyrical Choir, under the musical direction of Manuel Hernández-Silva.

It is the third Puccinian title that the young singer addresses, followed by Tosca (2015) Y Turandot (2014), the latter was recorded on CD under the musical direction of Zubin Mehta. On previous occasions he has performed at the Baluarte auditorium in Pamplona The Mass in C minor Mozart (2018) and the only Beethoven opera Fidelio (2020).

Recently, the tenor interpreted La Adelfa for the last time in November 2020 in the Great Theater of his native Córdoba, as part of the program ‘The Spanish song’. The concert has been postponed until 3 of March, where he will present his first solo album entitled Routes, winner of the Gold Melomaniac.

For more information and ticket sales

With four functions of Manon Lescaut, one of the most complex and demanding works of Giacomo Puccini, will debut on the podium of Massimo Bellini Theater in Catania (Italy) the spanish teacher José Miguel Pérez-Sierra, owner of an impressive international career. The Madrid manager will approach for the first time this score, counting on two purebred Puccinians for the main roles such as the soprano Norma Fantini and tenor Marcello Giordani (days 19, 22, 24 Y 26 of March). His baton returns to Puccini after opening the season of the Opéra-Théâtre de Metz (France), precisely with a great Puccini: Il Trittico, composed by the operas Il tabarro, Gianni Schicchi and Sister Angelica.

Maestro Pérez-Sierra continues in this way with a frenzied activity that has included titles such as Lucrezia Borgia in Bilbao, his debut in the season of the National Orchestra of Spain in Madrid or a concert tour with the soprano Ainhoa ​​Arteta in various Spanish cities.

After your engagement in Catania, will conduct Rossini's opera Il signor Bruschino at the Opéra National du Rhin (France) with representations in Mulhouse (29 Y 30 of April), Colmar (6 of May) and Strasbourg (12 Y 13 of May). 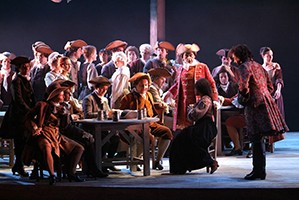 ABAO-OLBE (Bilbao Association of Friends of the Opera) recovers after thirteen years since its last performance Manon Lescaut from Puccini. The days 20, 23, 26 Y 29 February, sponsored by the Provincial Council of Bizkaia, climbs scene is fascinating and tragic story encumbró the Tuscan master as one of the leaders of the verismo school.

The passion, The virtue, the desire, temperance and the desperate and urgent love of youth run through the scenes of this lyrical tragedy inspired by a literary character considered one of the great myths of modern history: The fatal woman. Manon is a woman who has a magnetic personality and moves between naivety, lack of morale, tenderness and deception bringing misfortune to herself and those around her. To bring the characters of this opera to life, ABAO-OLBE has assembled a cast led by the Gipuzkoan soprano Ainhoa ​​Arteta, recently awarded the Gold Medal for Merit in Fine Arts, who returns to Bilbao to give voice to ‘Manon Lescaut’. At his side and completing the leading duo the North American tenor Gregory customer, distinguished as best male singer at the Teatro Campoamor Lyrical Awards for his performance of ‘Canio’ and ‘Turiddu’ in the ABAO production of Cavalleria Rusticana and Pagliacci among others, takes over the role of the lover ‘Renato des Grieux’. Next to them the Santander baritone closes the lineup Manuel Lanza as ‘Lescaut’, the catalan bass Stefano Palatchi como "Geronte di Ravoir", the mezzo-soprano from Gipuzkoa Marifé Nogales as ‘A Musician’, the Cantabrian tenor Manuel de Diego como 'Edmondo', the Biscayan baritone Gexan Etxabe como 'Hairdresser / Navy Commander ', the bass from Bilbao David aguayo as ‘Sergente’ and the tenor Eduardo Ituarte como 'The Dance Master / A Lamplighter '

In the pit the long-awaited debut in ABAO-OLBE of the master Pedro Halffter, great connoisseur of the Puccinian repertoire, to the front of the Symphony conducting a complex score that combines a soft and sensual melody with passionate moments of dramatic intensity. The choral part is, once again, task of the Bilbao Opera Choir, with Boris Dujin in front.

On stage a production from the Teatro Regio di Parma, conceived by the newcomer in ABAO Stephen Medcalf, characterized by a classic setting, adjusted to the script, with a careful wardrobe profuse in details and characterization of the period of Jaime Vartan and subtle light effects designed by Simon Corder. The scenography is a universe of pure colors of great visual efficiency with surprising symbolic effects and versatile elements such as mirrors that first represent the opulence that seduces the protagonist to later become her prison, or ingenious as the simulation of the float and the ship.

In order to analyze, in advance the premiere, the most relevant aspects of this opera by Puccini, ABAO-OLBE has organized a conference, Free entry, which will take place on friday 19 February at 20.00 hours at the Hotel Ercilla. This time, Iñigo Arbiza, Scherzo's music critic and Noticias de Gipuzkoa, and Head of Communication of the ONCE in Euskadi, discover the ins and outs of Manon Lescaut.