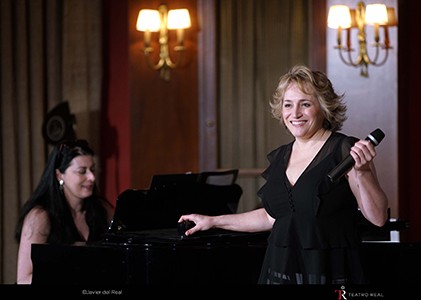 The next days 3 Y 4 of June, to 21.30 hours he Teatro Real will release a new format in its musical evening Dance room, with soprano Patricia Racette starring. Under the title Diva on detour, the main interpreter Street Scene, Kurt Weill, currently in Madrid scenario, will offer a program with cabaret songs and music, authors such as Stephen Sondheim ones, Cole Porter, George Gershwin y Edith Piaf.

Accompanied on piano by Craig Terry, Racette leave aside his extraordinary gifts as an opera singer to immerse themselves in American folk songs repertoire, demonstrating, not only the versatility of his voice, but also its character, its easy to dive into the themes of the songs and bring the public along the roads of tear, happiness or humor in an evening bygone era of closeness and complicity.

Unlike other opera singers, when Patricia Racette it departs from the opera repertoire, his voice changes to travel the musical road with another record. Appreciate the intimate spaces, with the audience looking directly into her eyes, sharing experiences and highlighting details of some very special songs. In this atmosphere very personal, the audience is part of the concert almost like another instrument, Racette and improvises the program, alternating songs, seducing an event in which fit more than two ...

This American soprano grew up in New Hampshire and studied at the North Texas State University. He was a member of the Merola Opera Program San Francisco and Adler Fellowship. She has been invited to sing at the Metropolitan Opera House in New York, the Royal Opera House in London, the Liceu, el Theater an der Wien, la Washington National Opera, the Inglés National Opera and Lyric Opera of Chicago, where he has played characters Mimì (Bohemian), Cio Cio San (Madama Butterfly), Madame Lidoine (Dialogues of the Carmelites), Ellen Orford (Peter Grimes), Katerina (Lady Macbeth de Mtsensk), Giorgette, Sister Angelica y Lauretta (The triptych), Maddalena (Andrea Chénier) and eponyms Manon Lescaut, Tosca, Salome Y Katia Kabanová. He has participated in the world premieres of American Tragedy, Tobias Picker, The Letter ,Paul Moravec there Cold Sassy, de Carlisle Floyd, among others. He has recently sung in The Consul, Menotti,In Chicago.

Born in Tullahoma (Tennessee), He earned a degree in music at Tennessee Technological University and continued his studies at Florida State University. He also graduated in piano accompaniment at the Manhattan School of Music with Warren Jones. He is currently musical director Patrick and Shirley Ryan Opera Center and assistant director of the Lyric Opera of Chicago. Previously he was an assistant at the Metropolitan Opera House in New York. After his debut at Carnegie Hall in 2000, It has appeared in major concert halls (Alice Tully Hall, Kennedy Center, Metropolitan Museum of Art) and she has accompanied singers like Jamie Barton, Stephanie Blythe, Eric Cutler, Joyce DiDonato, Giuseppe Filianoti, Susan Graham y Bo Skovhus; He also has worked as a chamber musician with members of the Orchestra of the Metropolitan Opera House, Lyric Opera of Chicago, Gewandhaus Orchester and the Pro Arte String Quartet. Debuts at the Royal Theater. 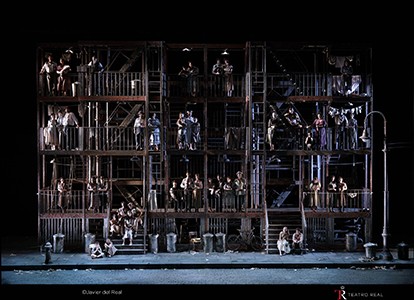 After the successful premiere in Madrid Street Scone last February, production returns to stage Teatro Real between days 26 May and 1 of June, with five functions.

British director John Fulljames is responsible for the staging of this singular work, in the new production of Teatro Real released two months ago.

Tim Murray, who led Real Porgy and Bess in 2014 and this production premiered in February, He will head a large cast including opera singers, Musical performers, dancer-singers, actors, The Little Singers choir ORCAM and the Choir and Orchestra of the Teatro Real Headlines.

Around Street Scene graduates will be offered two concerts Diva on Detour, with songs from Broadway and cabaret, in the Ballroom of the Royal Theater, the days 3 Y 4 June at 21.30 hours, with the great American star Patricia Racette, accompanied on piano by Craig Terry.

Functions Street Scene They are sponsored by the BBV FoundationA.

Between 26 May and 1 of June, Royal Theatre offer 5 functions from Street Scene (street scene), from Kurt Weill, in a new production at the Royal Theater in co-production with Cologne Operas and Montecarlo, released with an excellent reception in Madrid last February.

With this hybrid and marginal jewel of American operatic repertoire, articulating and joins the refinement of the Central orchestration, the magic of Broadway musicals and richness of African-American music, the composer Kurt Weill (1900-1950), German Jew settled in New York, followed in the wake of Porgy and Bess, from George Gershwin ( raigambre trying to consolidate an 'American opera', with its uniqueness and own language.

For it was associated with two different profile writers: Elmer Rice (1892-1967), author Street Scene Pulitzer ─premio 1929 and adapted for the screen by King Vidor, in 1931─, Y Langston Hughes (1902-1967), poet, African American novelist and activist attached to the movement Harlem Renaissance, which claimed the black art linked to his roots, traditions and idiosyncrasies.

the first, the dramatist Elmer Rice, Weill receives the great mosaic of lives trapped in a 'cul de sac', which they flow stories of love and hate, slanders and hardship, evictions and abuse, but also of dreams and illusions, friendship and compassion, our likeness History of stairs, Buero Vallejo, but located in the suburbs of New York in the postwar years.

the second, Langston Hughes, composer received a booklet with a great multiracial prosody, texts to the rhythm of jazz, with inflections, accents and jargon that define each of the nearly forty characters that populate the busy New York street.

With this dramaturgical material as rich, Kurt Weill, already naturalized US citizen with extensive experience in the composition of lyric repertoire ─musicales, operas, songs and music escena─ decides to go further, creating an opera that spoken parts, arias, duos, set numbers, dance and songs flowed intertwined, articulating several overlapping stories with refined orchestral writing, effective and concise, inheritor of European tradition, but contaminated by all the musical influences of his time on both sides of the Atlantic.

The opera premiered on Broadway, at the Adelphi Theater, in 1947, conquering the Tony award for best original score in the first edition of these awards, since then they have grown in prestige and popularity.

But nevertheless, the mestizo character of this 'opera Broadway', which it requires a huge cast of great diversity, choirs and orchestra, the work has moved away from both the musical theaters and temples of opera, placing the Street Scene in limbo which begins to free.

The Royal Theatre, which she premiered this opera in Madrid in February, It will present its production stage director John Fulljames and set design and costumes by Dick Bird.

The Royal Theater will be filled with jazz rhythms, de swing y de blues, bringing its new production worldwide through editing a DVD and audiovisual recording is distributed internationally.