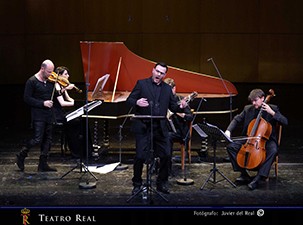 Ten years is a long time if what it is about is to listen to Andreas Scholl at Teatro Real. It did last 22 of April. This time accompanied by his wife, Tamar Halperin, the key, and by Wet Titian, laud y Marco Frezzato, cello. All of them captained by the violinist Stefano Montanari whose magical virtuosity led him to the purest baroque interpretation, making variations and impossible phrases full of originality. His mastery of the instrument is absolute. Not in vain is the author of Baroque violin method.

The repertoire was dedicated in its instrumental part to Salvatore Lanzetti, with his Sonata for cello and basso continuo in G major, on. 1 núm. 7. Vivaldi, with two Sonatas in trio in C major, RV 82 y RV 85. And the Sonata for Violin and Bass Continuo in D major, on. 5 núm. 1 from Arcangelo Corelli. This moment in which Stefano Montanari amazed everyone, including Scholl himself, with his devilish mastery of the instrument.

The vocal part of the recital was composed of works by Händel, Cantata Nel dolce tempo, HWV 135b y Cantata I hear that narrow, HWV 161a. From Caldara, Cantata From your lights and Cantata Vague lights and the anonymous L´ocasión of my penalties, The blondie, which was repeated in the only encore of the night, Y The butterflies.

Three words define Andreas Scholl's performance in this recital, technique, phrasing and expressiveness. A generous and well-defined phrasing, perfect diction, significant volume of voice and considerable length. A very pure and warm voice, of great interpretive sensitivity and facility for the most subtle nuance. For something is considered, so for no reason, one of the best interpreters of his string.