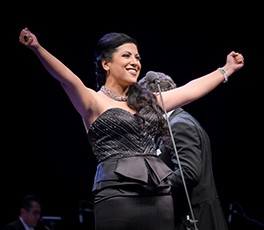 Despite his surname of Georgian origin, Maria Katzarava comes from Mexico. That land that gives us always powerful and expressive voices. His is, definitely, one that with greater intensity sound. It has come to Europe and established its headquarters in Barcelona, starting an international career that aims successful. He 6 August is released in one of his favorite roles, the Liú from Turandot, next to Irène Theorin Y Roberto Aronica. Between rehearsals he replied to questions Brío Clásica.

Stay with the name, Maria Katzarava, because it is here to stay.

Brío Clásica: The day 6 August is released in the Peralada Festival Turandot. Your character, Liú, It is not unknown to you, He has already played in Cagliari and in Caracalla. es Liú, next to Mimi Y Butterfly one of the most sufridoras Puccini heroines. You need a great interpretative expression. How a role is addressed like this?

Maria Katzarava: Especially the role of Liù is very lucky for us the sopranos. It is perfectly well written musically and I think Puccini It has given the psychological profile required for this role, and it is very clear. I think it's a sweet for the interpreter, because it is also very attached to public taste and it feels much closer to what you feel Liú, that what may feel Truandot.

B.C.: You've had the opportunity to perfect his technique with Mirella Freni, grandísima una Liú. Did he prepare this character with her?

M. K.: I studied some time with Mirella and one of the roles that she was more prepared with the liu. This character is one of my workhorses. It is the most interpret and, Besides, one of my favorite roles. With this character if I gave him everything with Mirella.

B. C.: His character in Turandot has two almost consecutive extraordinary arias, “L´amore?… So much love and inconfesato " and the beautiful "You who gel inhabitant", a beautiful and dramatic andantino. What are the biggest difficulties in interpreting these two arias?

M. K.: Always looking for the Liú is very expressive and has these piannissimi that the public always waiting for the interpreter. I think that's the biggest difficulty is that this character.

B. C.: We know that dominates different registers, from Desdemona in Otello, Micaela in Carmen, Antonia and Giulietta in Tales of Hoffmann, Margarita in Splendor… Even made inroads into the baroque repertoire, Where he feels more comfortable now?

M. K.: I feel more comfortable at precisely the heavier repertoire, right where I'm focusing more right now. As Madama Butterfly, Tosca O The Troubadour, Simon Boccanegra. All vocally more mature roles. For I have had to wait many years and finally I succeeded and I in them.

B. C.: What is interpreting roles in the future?

M. K.: I think those roles are going to be my best. It's where my voice can really evolve and I feel comfortable one hundred!. Where I can really feel at ease and full. They are also histriónicamente roles that I like a lot and feel a lot when I play. So everything is easier to pass it to the public.

B. C.: You, before entering fully into the lyrical, He explored other musical worlds like Pop or Rock. For an opera singer, and considering how delicate is the voice, Using different registers makes the most versatile voice or, Conversely, You can get to harm it?

M. K.: I think you have to be a sensitive and open artist at a time. I am of the idea that it is a great experience to open your horizons, your gates, also other repertoire, other genres. And always savvy about changing your chip. If you sing Pop-Rock, change the chip to not sound to an opera singer trying to sing like a poppy, which it is something terrible, and vice versa. I believe that intelligence is, in just know that when you sing pop is pop and when you sing opera is opera. I had that opportunity and headed to the opera through pop. And it's something I can still differentiate and have the facility to change the chip. And I think, definitely, that also helps a lot to attract an audience that is not always soaked opera. It's a great opportunity.

B. C.: Their mentality is very open to addressing new productions. What do you think of the latest scenes that sometimes use provocation as a fundamental element of the work?

M. K.: I am very open forever, also with stage directors to explore new facets of a character that I have often come to be interpreted in traditional way. I am very much in favor of the contemporary scene set in. When you want to present a current situation, provided they have a logic and a story that really Cuadre me, I'm always ready. I think people appreciate it too much. Not always and exclusively traditional proposals.

B. C.: His mother is Mexican violinist and his father is Georgian violinist, and perhaps are two different conceptions of performing music. Is there any difference in sound between European and American orchestras?

M. K.: I think so. The ancient culture always has also focused on the instruments and classical music. The story is oldest in Europe. I think it has a different sound. I think it can make a difference even in European orchestras Georgian to Russian, especially in technical. Even with the singers. Can be distinguished by its origin only technical. There are very marked differences.

B. C.: Mexico has always been the cradle of extraordinary singers Ramón Vargas. Now You yourself or Javier Camarena. How do you see the future of opera in his country?

M. K.: I am proud to see that go so much Mexican voices. It is very important to highlight the presence of the sopranos, not only Tenors. Sopranos and mezzos, also contraaltos which are mostly in northern Mexico and where I have found most gratifying surprises. I insist, not only men, especially women and I think you have to start giving a very important role to women who are very present. But sometimes more presence is given to the tenors and female voices are very important.