Daniel Barenboim – On my new piano 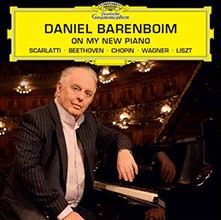 Barenboim has selected works by four keyboard masters to display his piano’s timbral and tonal capabilities:

“I’ve fallen in love with my new piano”, he exclaims, “and want to spend as much time with it as possible.”

Conceived and commissioned by Barenboim himself, the new piano was developed and built by esteemed Belgian instrument maker Chris Maene, with support from Steinway & Sons.

Barenboim was inspired to create a new piano after playing Franz Liszt’s restored grand piano during a trip to Siena in September 2011. Struck by the vital differences in sound of an instrument constructed with straight, parallel strings rather than the diagonal crossed ones of a contemporary instrument, he set out to create a brand new instrument that combines the best of the old and the new and offers a real alternative for pianists and music-lovers in the 21st century.

“The transparency and tonal characteristics of the traditional straight-strung instruments is so different from the homogenous tone produced by the modern piano across its entire range. The clearly distinguishable voices and color across its registers of Liszt’s piano inspired me to explore the possibility of combining these qualities with the power, looks, evenness of touch, stability of tuning and other technical advantages of the modern Steinway…”

There are only two Barenboim-Maene in the world.

Daniel Barenboim will play selected pieces of the album repertoire on his new piano during his upcoming European recital tour.