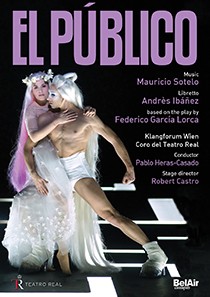 As part of the commemorative activities of its Bicentennial, he Teatro Real increases the global spread of his operatic productions with the launch of two new audiovisual recordings made last year, which hit the market on DVD and Blu-Ray: The public, from Mauricio Sotelo (1961) Y Roberto Devereux, from Gaetano Donizetti (1797-1848), both co-produced with Bel Air Media and distributed in Spain by Direct music.

THE PUBLIC, Custom Royal Theatre whose world premiere, he 24 February 2015, He had an enormous media impact, You can now reach an even wider audience, in an audiovisual co-production between the Royal Theatre and Bel Air Media in partnership with TVE (issued last opera 29 of November), Arte France and M_Media-, and also available for international distribution on television and digital media.

The opera, libretto by Andrés Ibáñez (1961), rescues the essence of the novel by Federico Garcia Lorca (1898-1936), retaining its two fundamental issues: “homosexuality and contemporary theater; the appearance and mask. Mask 'love that can not speak its name' and, Finally, mask is revealed as the essence of the human being. (…) The work explores sexual desire with a frankness and a complexity that defies simplifications well-meaning more or less moralizing ".

To give life to thirty characters parading in the opera, stage director Robert Castro He started from the atmosphere Poet in New York evoked in the scenography designed by Alexander Polzin, with nine huge painted backdrops suggesting the iconic lorquiano screen and huge buildings of Manhattan. From that poetic space journey takes Lorca spiral into the identity of the artist and the abyss of love is explored, hiding behind the game of mirrors, masks and allegories that mix reality and fantasy.

A multicultural artistic team has joined autenticad wealth and refinement of flamenco with contemporary music, with artists of both worlds: seven singers led by baritones José Antonio López Y Thomas Tatzl y las sopranos Gun-Brit Barkmin e Isabella Gaudí embody the various and enigmatic characters who weave the drama; the singers Archangel Y Jesus Mendez and the dancer Ruben Olmo interpret the three white horses symbolizing the uncontrollable forces of nature; and several dancers-actors evoke the symbolic and surreal characters who parade through the work. Beside them act the Titular Choir of the Teatro Real, the prestigious orchestra contemporary musicKlangforum de Viena, the great guitarist Cañizares and percussionist Augustine Diassera, all under the direction of Pablo Heras-Casado, principal guest musical director of the Teatro Real.

ROBERTO DEVEREUX, de Gaetano Donizetti (1797-1848), which opened with great success last season the Royal Theatre and was broadcast in thirty European broadcasters through the EBU (European Broadcasting Union), also hits the market on DVD and Blu-Ray with the seal of the Royal Theatre in coproduction with Bel Air Media and Kairos Musique, in association with M_Media, Samsung collaboration and support of the Centre national du cinéma et de l'image animée.

This bel canto opera, great vocal virtuosism, It is an overwhelming psychological portrait of Queen Elizabeth I of England, victim of its own despotism in the claustrophobic and inbred Tudor court.

Created in a very painful period of life -the composer Donizetti had lost his parents and his wife after the death of his three consecutive children-, when Naples was devastated by cholera, the score Roberto Devereux,filled with rage, grief and despair, would for its author, as he himself confessed, "Opera of emotions".

In the wake of Donizetti, the director of the South African scene Alessandro Talevi reinforces the expression of lustful impulses and corrosive torments of impetuous queen, in a destructive spiral evoked by a symbolic spider it will entangling and strangling the four characters, taking shape in the dark and delirious scenography designed by Madeleine Boyd, She also figurines of the opera.

The great soprano Mariella should leads the cast with a wrenching interpretation of the Queen of England unanimously applauded. Seconder tenor Gregory Could, in the title role, baritone Marco Caria and mezzosoprano Silvia Tro Santafe, all under the expert baton of sensitive Bruno Campanella, in front of Headlines Choir and Orchestra of the Teatro Real.