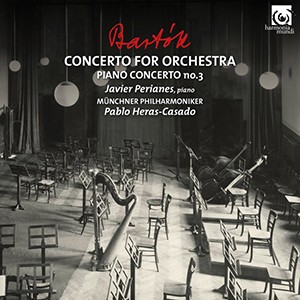 Two of the most international contemporary Spanish musicians, the pianist Javier Perianes and the conductor Pablo Heras-Casado, They have joined the Munich Philharmonic in an album dedicated to the last two works composed by Bela Bartok: he Concerto for Orchestra and the Piano Concerto No.. 3. In a joint tour that starts next 12 February – and it will take them several Spanish cities (Barcelona, Madrid, Fuerteventura, Las Palmas and Santa Cruz de Tenerife)- will present his latest work published by the harmonia mundi label, which goes on sale next 26 from January.

The album includes two works considered the musical testament of the Hungarian master (1881-1945), signed before dying in his American exile. Bartók, suffering from leukemia and disappointed by the warm reception he received musical on US soil, He spent his last energies in these two masterpieces that ultimately led to a missed prestige in their host country. Perianes, Heras-Casado and the Munich Philharmonic add their talent on a disk that realizes the inexhaustible strength of genius even in the most adverse circumstances.

He Concerto for Orchestra It was commissioned director Serge Koussevitzky at the request of friends of Bartók, also the director Fritz Reiner and violinist Zoltan Szekely. Both claimed that this request would ease the economic hardships the teacher after arrival in the US, in 1940. He is fleeing war and sought to secure the future of Ditta Pasztory, his wife and pianist, I had not seen taking off his acting career in the Americas.

This work was composed between August and October 1943. Collect favorite teacher stylistic resources, as well as touches of folk music, both central European and Arab origin. Not in vain, Bartók spent much of his career studying the claim and popular music culture. He Concerto for Orchestra It premiered with great success in December 1944 under the direction of Koussevitzky.

On the other hand, he Piano Concerto No.. 3 is the single piece for this instrument Bartok not made to be performed by him. When he died in September 1945 still they left him 17 measures to finish the work. He completed the task his pupil and friend Tibor Serly, following the teacher's instructions. This composition was premiered in February 1946, Philadelphia, and performed by the Hungarian artists, A pianist György Sándor y el director Eugene Ormandy.

National Music Award 2012 granted by the Ministry of Culture of Spain, Javier Perianes has been described as "a pianist with impeccable and refined taste, endowed with an extraordinary sound warmth " (The Telegraph). His international career spans five continents with concerts have taken him to some of the world's most prestigious halls such as Carnegie Hall in New York, Barbican, Royal Festival Hall y Wigmore Hall de Londres, Philharmonie there Théâtre des Champs-Élysées de París, Philharmonie Berlin, Musikverein de Viena, Amsterdam Concertgebouw, Philharmonic Hall de San Petersburgo, Great Hall of the Moscow Conservatory, Suntory Hall in Tokyo and the Teatro Colon in Buenos Aires. He has performed at festivals such as Lucerne, BBC Proms, Vail, Blossom, Ravinia, La Roque d’Anthéron, Bregenz, Grafenegg, San Sebastian and Granada.

Javier Perianes artist is exclusive seal of harmony mundi. His extensive discography ranges from Beethoven, Schubert, Debussy, Chopin and Mendelssohn to Turina, Granados, Mompou, Blasco de Nebra failure and. His album Live recording Concert Grieg and a selection of Lyric pieces It was unanimously praised by critics and described as "A new benchmark" por la revista Classical; He also earned the distinction "Editor's Choice" Gramophone and "Master" magazine Pianist. His recording Nights in the Gardens of Spain along with a selection of piano pieces de Falla was nominated for a Latin Grammy 2012. Perianes's latest album is dedicated to the sonatas D.960 Y D.664 Schubert.

described by The New York Times as "what any thinking mind would consider a young director first ", his personality is best reflected in the quality of the relationships he has developed with orchestras such as the San Francisco Symphony, Los Angeles Philharmonic, Philharmonia, London Symphony, Berlin State Opera, Bavarian Radio Symphony Orchestra, Orchestra of the Mariinsky Theater in St. Petersburg, Freiburg Barockorchester and as conductor of the Orchestra of St. Luke's and principal guest conductor of the Teatro Real. This personality is also shown in its commitments as an ambassador for the NGO Action Aid to promote its efforts to eradicate poverty and injustice in the world.

Para German Grammophon, He has recorded albums dedicated to Farinelli, as well as works of Jacob, Michael Jerome y, and a DVD of the opera L'elisir d'amore Donizetti. He participated in a disc of arias for baritone Sony with Placido Domingo and DVD La Traviata desde el Festspielhaus de Baden Baden. He also directed the recent Decca recording of the Shostakovich cello concertos, con Alisa Weilerstein y la SO of the Bavarian Radio.

Director of the Year by Musical America magazine 2014, He has been awarded the Medal of Honor of the Foundation Rodriguez Acosta and Ambassador Award Junta de Andalucía. In February 2012, Granada City Council, your natal city, He was awarded the Gold Medal of Merit, and it is also Honorary Ambassador City, and Son of the Province of Granada. Since this year is director of the International Festival of Music and Dance in his hometown.