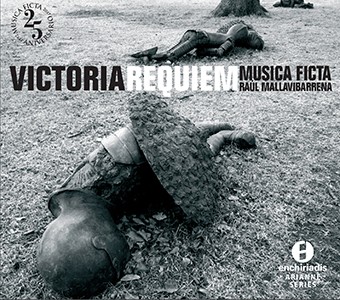 The formation of polyphony music, baroque set resident National Dissemination Center Musical (NCDM) in 2017, this September celebrates its 25 anniversary with the release of a new recording The Dead, masterpiece , the most famous composer of Spanish Renaissance. The group, founded in 1992 by director, Raúl Mallavibarrena, will star in the coming months several tours and national and international concerts, with programs that revolve around the ephemeris of Monteverdi, Cisneros or "the Spanish way".

Coinciding with the 25 years after its founding and 15 years after the publication of his first recording The Dead, Ficta music returns to its composer, and favorite work period: the teacher Victoria, his famous Requiem and Spanish Renaissance. Approaching the score is, but nevertheless, completely different. Its first version (Best album Renaissance 2002, magazine CD Compact), recorded two voices and accompanied by organ and bassoon, keeping the original tone of the work, more serious loudness. The new recording, instead, It was recorded a cappella in the chapel of the Hospice of Santa Cruz (Madrid), by voice, except high and low bent, and a high pitch. The result is more luminous and poetic drama keeping. "Victoria has been the composer who most helped me understand the Polyphony, which it has allowed me to approach this music from different perspectives ", Mallavibarrena points.

Passionate and close profile that addresses religious polyphony music has made Ficta one of the leading innovators of the interpretation of early music in our country. In this version of The Dead It departs from orthodoxy to delight today's ears with a very different sensibility.

Raúl Mallavibarrena (Oviedo, 1970) ficta founded in 1992. The set offered in 1993 his first concert in Madrid and 1996 He released his first album with Lamentations of Jeremiah in the Cantus label. Since then he has published 20 titles under the label Enchiriadis, founded by himself in the year Mallavibarrena 2000. He has been the only group to record old music Spanish Parnassus, Pedro Ruimonte; the songbook of Turin, and the integral of the Villanescas, Francisco Guerrero. In 2005 first he performed in modern times zarzuela Exit Love World, Sebastián Durón, Arriaga Theater in Bilbao with the orchestra Civitas Harmoniae

National Dissemination Center Musical has recognized the trajectory of Ficta Baroque ensemble Musica by naming resident 2017. With this distinction will star in several concerts and tours in Spain, Europe and Latin America. These days part in the International Festival of Sacred Music in Bogotá, which is held up 1 October. In November he will perform at the Auditorio Nacional in the Universe Baroque Cycle and closing of the International Organ Festival of León Cathedral with a program of Monteverdi, the occasion of 450 anniversary of the composer's death. This month also undertake a tour that will depart from Madrid bound for Milan, Lyon, Frankfurt, Luxembourg and Brussels to commemorate the 450 anniversary of the "Spanish way", the route inaugurated in 1567 by the third Duke of Alba to bring thirds of the Spanish army to war with Flanders, thus avoiding the sea route, more dangerous.

In addition to its commitments to the CNDM, Ficta music has been invited to participate in the commemoration of 500 anniversary of the death of Cardinal Cisneros. For this reason, he 28 October will give a concert in Torrelaguna.