Pablo Heras-Casado made his debut in Archiv with Farinelli 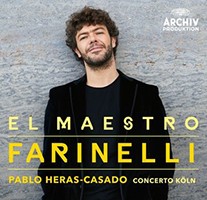 Pablo Heras-Casado claimed by the ensemble Concerto Köln, Facet entrepreneur famous castrato Farinelli, which during his stay at the court of Ferdinand VI, He was instrumental in the development and positioning of Spanish repertoire within the framework of the great European tradition. An album 11 amazing world first recordings, which it has the support of countertenor Bejun Mehta.

Heras-Casado, who has worked at the forefront of the best orchestras and soloists in the world, and he has been chosen by Archiv as one of its ambassadors from the relaunch of the seal 2013, It is also the first Spanish director who recorded for the label mentioned. Works by Comfort, Purple, Hasse, J. the Nebra, C. Ph. E. Bach, Corradini, Marcolini, Jommeli Y Traetta