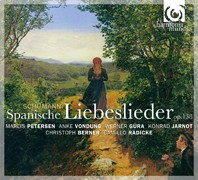 Year 1849 It was one of the most productive years in the career of Schumann. The inspiration for their Opp. 74 Y 138 It was an anthology of Spanish texts translated by Emanuele Geibel. These love poems lent great to be set to music with a combination of "Spanish" style tinged with the colors Central. Much more intimate, los Minnespiel Op. 101 They lead us to the purest German romanticism.