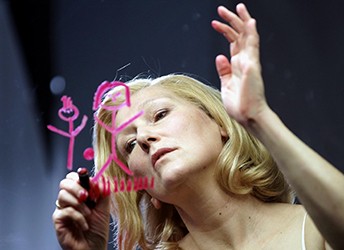 “Whoever wants to listen to music in 'my' operas to stay at home and put helmets ".
With these words the set designer was dispatched Krzysztof Warlikowski in a recent interview on ABC. More than a declaration of intent, I would take this comment as a recommendation.

This is the second version of Alceste, one of the operas reform Gluck, premiered in Paris in 1776, in which notable differences can be seen with the first version in Italian. a little lost vocal virtuosity of the performers and the beautiful melodies, to vindicate, according to the composer himself, “simplicity, the truth and the absence of involvement”.
On the more technical aspect of the score, in the new French version of some characters disappear, others appear and modify the second and third acts. The taste of the French public took the time to make some concession Gluck introducing ballets and pantomimes that just now account. an obvious transition begins therefore between Baroque opera and classical, marking the conceptual and aesthetic aspects that define the way of the future opera.
In this version, darker and austere than the first, Gluck shows greater fidelity to the drama of Euripides. In her, the tragedy and the emotions reach a higher intensity.

Krzysztof Warlikowski He has moved the scene today. Alceste is now Lady Di. On a big screen, the dramatization of the famous and controversial interview in which convulsed unveiled the secrets of her marriage to Prince Charles projects. Projections accompany the course of the work by enhancing the dramatization.
Warlikowski is one of those registas to lack only go on stage. Or maybe not, it gets all the attention of the work to focus on his work and his person. Makes a genuine manipulation of the libretto by François-Louis Gand Le Blanc. Rectify allowed librettist and composer adding text to better adapt to your current criteria. Frivolous dramatic Origin representing Hades turned into morgue, where sex scenes post mortem distracted throughout the third act.
But the greatest moments of confusion and they start in the first act, especially from the scene of the banquet. When, suddenly, a flamenco tablao is mounted on one of the most emotional moments. From now on, all the work is trivialized and it is difficult to get into the music composer approaches. To all this must be added an annoying and cold lighting that contributes, as he usually does this set designer, to create an environment inhospitable and intemperate.

Ivor Bolton performs an extreme concentration exercise. First, because the spotlights focus on it after being presented as principal conductor from the season 2015-2016. Secondly, because it is very difficult to abstract from the general to the stunning scenery leading. Nonetheless, and although reduced, the orchestra sounded good. The start was discreet, sometimes the sound was lackluster. But his leadership grew as he advanced representation and extracted appreciable moments of delicacy, especially some original metals. always attentive to the choir and the nuances of the orchestra, only lacked one point more dramatic at times.

Angela Denoke It is a good actress, but it seems that does not stop believing vocally Alceste. It stays in Ladi Di. During the first act difficulties were noted, especially in the high notes. At the end came the voice Denoke firm and beautiful timbre.

the tenor Paul Groves as Admete, he caught the scenery. He roamed the stage with his voice dull and dull. I do not blame.

Once again, and they are already many, He highlighted the Jamaican baritone Willard White. The strength of her voice, large and well timbrada, and their interpretations, They are always a guarantee and can cover exemplarily, such as, two roles, the high priest and Thanatos.

The Hercule baritone Thomas Oliemas, but relegated in this production, maintained the type and vocal presence unperturbed too. Mentioning the young Argentine Fernando Radó low. With 27 years and making Heraldo and oracle, promises a brilliant career.

The chorus in this opera is an important element. Their interventions are numerous and are not without complexity. Barring some untimely entry was in his usual line. Highlight good interventions of some of its members solo, Oxana Arabadzhieva Y César de Frutos, as coryphaei and Rosaida Castillo as a governess.

Warlikowski says his works are for public intelligent. Not be sorry.