A baroque opera is always an event. First, and in the case of Alcina, for the excellence of their music. And secondly by the few opportunities we have to enjoy.

One can say that Alcina was the final product after the bad relationship of two geniuses of Baroque music. Haendel as a composer who was then a conductor at the Royal Academy of Music (1720-1728), based at King's Theatre, and the counter Senesino as interpreter of most of his compositions.

In 1734 the differences between the two are accentuated and they decide to separate. The composer leaves the King's Theater, to settle in Covent Garden, and Senesino starts working for a new Italian composer, Nicola Porpora, founding in the King's Theater the new company "Opera of the Nobility" (Nobility Opera).

This new business situation supposed an operatic duel between the former collaborators. Handel felt the obligation to create a work capable of competing with his rival in London at the time.. And this is where our protagonist appears, Alcina.

The taste for the most extravagant mythology that occurred at the time of its composition, led Handel to look at an anonymous script, based on L´isola d´Alcina from Riccardo Broschi, based in turn on Cantos VI and VII of the epic poem Orlando Furioso (1516) from Ludovico Ariosto. A tale in which the sorceress Alcina turns her former lovers into animals or rocks.

Alcina has long been unjustly condemned to remain outside the usual repertoires. Accused of "unrepresentable" and for alleged difficulties in dramatizing a devilish libretto where the interrelation of the characters almost forces the viewer to use a who's who guide.

This production of the Bordeaux Opera consists of different aspects to take into account. The first, and more important, Handel's extraordinary music. A baroque masterpiece second only to Julius Caesar. This is the main reason why it is not understood that the public does not finish filling the theater or, even, leave it in one of the two breaks of which it has consisted. But maybe we will find later the explanation to this urgent need for dinner.

The scenic proposal of David Alden It is inspired by the movie of Woody Allen, The Purple Rose of Cairo. Under the idea of ​​the theater within the theater, Alden discovers the fantastic key to the work. As two sides of the same coin it presents the dream and the reality. Maybe that's why Alcina sings her first aria behind the curtain.

From the world of dreams, of fantasy. It is at that moment when the story begins. A decadent theater and the entrance to the boxes, are the main stages of the play.

Despite this outpouring of genius by David Alden, the scenic proposal does not finish reaching the public. It is excessively static in some cases and in others lack of rhythm and balance. There are times when the disconnect between music and scene is evident. The slight illumination of Simon Mills knows how to fill the small details with light, but it darkens situations that require more brightness. A code book is missing, not just to identify the characters, also to know the meaning of some scenes.

The general impression is that, maybe, the Royal Theater is a bit too big for this production. But who is really big has been some of the components of this second cast.

María José Moreno brings to life a sharp and cheerful Morgana. Performing his main arias skillfully and displaying almost pyrotechnic qualities in the “Go back to wandering”. Its treble and lightness brightened its impeccable performance.

Sofia Soloviy it has been a very solvent Alcina, especially in interpretation. Its elegant singing line gave us an Alcina with a certain aristocratic appearance.

Jose Maria Lo Monaco, as Ruggiero, it didn't happen to be nice. Its "Verdi prati"The second act was full of emotion.

The rest of the cast did not have their night. A Angelique Noldus you could barely hear her and Johannes Weisser, as Melisso, made viewers suffer in some of his speeches. The same happened to Anthony Gregory Y Franceca Lombardi Mazzulli. Sometimes their voices didn't seem to come out of their necks.

A great theater should not allow the suffering of some singers on stage. Nor does that of some viewers who pay the same price to listen to leading figures.

The orchestral conducting of Cristopher Moulds it was a balm. Demonstrated how you can achieve a baroque sound without the need for vintage instruments. He always accompanied each instrument of the Orchestra and each singer on stage and always smiling. We must highlight the musicians who performed from the stage, Eva Jornet Y Red Melody, Recorders. Victor Ardelean, violin and a master Simon Veis a cello. 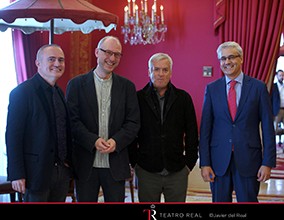 ten functions of the opera will be offered with two different distributions between days 27 October 10 of November.

Alcina It is a co-production Teatro Real and of the Bordeaux National Opera, which premiered production 2012.

In the stage version, director David Alden pays tribute to the theater as a refuge and escape from reality, Inspired by the movie The Purple Rose of Cairo (1985), from Woody Allen.

Two select deals seven singers are responsible for the interpretation of the opera, including their choral parts, under the expert baton of British Christopher Moulds in front of the Head of the Royal Theatre Orchestra.

Around Alcina will be offered next 5 November countertenor recital Xavier Sabata with arias Händel written for castrato, which will take place at the Sony Auditorium Albéniz Foundation (Plaza de Oriente).

Concert programs Sunday Camera 8 November and children's workshop Everyone to the Gayarre! of the 15 November will also be inspired by the great figure Handel.

Until the day 17 from January, the National Library It offers an exhibition on major issues Orlando Furioso, from Ludovico Ariosto, part epic poem the libretto of Alcina.

Day function 10 November will be broadcast live on Digital Palco.

Between days 27 October 10 of November Royal Theatre offer ten functions from Alcina, from georg Friedrich Handel (1685-1759), New coproduction of the Royal Theater and the Opera National de Bordeaux, where production premiered in May 2012.

Between the 42 Handel composed operas, Alcina -estrenada in 1735 Covent Garden in London in its final stage as operístico- composer is considered one of the most successful in the characterization of the characters and the expression of emotions. Its modern dramaturgy, his inspired melodies and brilliant orchestration justify the growing presence of this work in the programming of theaters and festivals around the world since its 'rediscovery' in the years 60 last century, after more than two hundred years of neglect.

In Alcina, Händel resort for the third time the epic poem Orlando Furioso, from Ludovico Ariosto (1474-1533) -after do in Orlando Y Ariodante—, to portray human emotions and passions with the freedom that gives the allegorical world, fantastic and supernatural Italian poet.

In its scenic conception of this opera, the meticulous director of American scene David Alden which he has directed eight titles Händel, including two different productions AlcinaHe makes a tribute to the cinema and theater as spaces for escape from reality.

The plot thickens when Alcina succumbs to true love for Ruggiero, while he is finally rescued by his beloved Bradamante and guardians of order and morality. But his release from the clutches of the sorceress also represents a return to real life, which will haunt forever nostalgia for that world dream, lust and debauchery.

In Alcina Seven characters express a huge and rich palette of emotions over more than three hours of music, including 26 arias, choral parts (performed by the seven soloists) and orchestral, in a scathing lyrical and poignant epic, which it will be interpreted by two select Real and deals Head of the Royal Theatre Orchestra, under the direction of renowned British director Christopher Moulds.

the score, inscribed in the canons of the call opera seria baroque, alternating recitatives advancing action and arias expressing the emotions of the characters and give wings to the virtuosic display singers.

In the Real cast it includes two transvestites papers: Ruggiero Bradamante The young man promised to love the insatiable sorceress Alcina- It was written for a castrated and it will be played by the mezzosopranos Christine Rice Y Jose Maria Lo Monaco; Oberto young and pert -character Handel created for a virtuoso soprano boy who had called his attention to a performance of his opera Ariodante- will be played by sopranos Erika Escribá Y Francesca Lombardi Mazzulli.

Karina Gauvin, interpreter of the title role, It has been one of the muses director and musicologist Alan Curtis, recently deceased, with whom he performed and recorded regularly over the last ten years. With him and a whole, The complex Baroque, He was unveiled at Real with Tolomeo, the same Händel, by the contralto Sonia Prina, another great specialist in Baroque, that accompanies this time as an interpreter of the role of Bradamante (Real he debuted in the season 2007-2008, next to Les Arts Florissants, in The orfeo Monteverdi). The trio protagonist is completed with the mezzosoprano Christine Rice, who acted in two productions directed by Pier Luigi Pizzi at Real: A Midsummer Night’s Dream, Benjamin Britten e The Return of Ulysses to Ithaca, de Claudio Monteverdi.

These three singers will alternate with Sofia Soloviy —Poppea e Nerone, Alceste Y The Marriage of Figaro- in the title role, and the mezzosopranos Jose Maria Lo Monaco Y Angelique Noldus, debuting at the Royal Theater.

Exposure The Furious in the BNE '

Selection of the main issues Orlando Furioso, of Ludovico Ariosto
6 October 2015 – 17 of January of 2016

Museum of the National Library of Spain. minimum room

Meeting with the directors and actors of Alcina

François Couperin: The nations: The Spanish

She is beautiful, but, watch out, you can turn into a cockroach ...