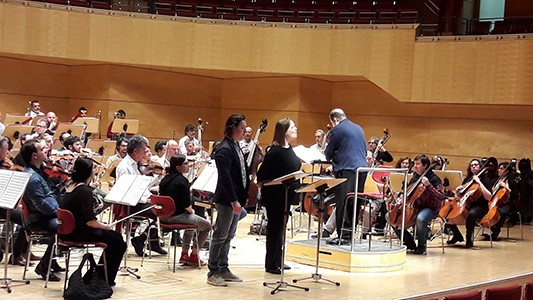 The Titular Orchestra of the Teatro Real He has offered this afternoon at the Alfried Krupp Chamber Philharmonic Essen a concert dedicated to the Italian composer Gioacchino Rossini, in which he counted on the participation of the Australian soprano Jessica Pratt and tenor Russian Jessica Pratt, under the baton of Ivor Bolton, musical director of the Royal Theater and Artist in Residence Essen Philharmonic.

Ivor Bolton It is one of the great protagonists of the current musical season of the German city with six concerts in charge, in which he has already directed the Orchestra of the Dresden Festival, the Basel Symphony Orchestra and the Chowerk Ruhr and the Concerto Köln chamber orchestra. After the performance tonight, by the Titular Orchestra of the Teatro Real, will return to Essen next 29 May the Mozarteum Orchester Salzburg with, of which he was also principal conductor.

The public, that filled the room, it has set up to reward the musicians with a standing ovation, After enjoying a program in which arias and duets from operas were performed best known as the composer of Pesaro Semiramide, Guillermo Tell, Otello, Le Comte Ory, La Cenerentola and The Barber of Seville. The first part of the program has also included Simple Symphony, on 4 Benjamin Britten.

Two great voices have shining examples in Gala: Jessica Pratt, recognized as one of the great interpreters of Rossini time, as evidenced by his regular presence at the Festival of Pesaro, Rossini twelve papers in their repertoire, Y Dmitry Korchak, winner of the Francesc Viñas Singing Contest and the fourth prize of Operalia, whose voice is already demanded by opera houses around the world. Korchak acted replacing Xabier Anduaga, initially scheduled and canceled due to illness.

Last season, in March 2019, Titular Orchestra of the Royal Theater participated in the International Rostropovich Festival in Moscow, under the direction of Gustavo Gimeno, with violinist Leticia Moreno solo, and the previous, The Royal Theater was the main guest at the Savonlinna Festival, in celebration of the centenary of the independence of Finland, with an adaptation of the assembly I puritani, performed by Emilio Sagi, with the Choir and Orchestra of the Royal Theater Headlines, with musical direction by Evelino Pido.