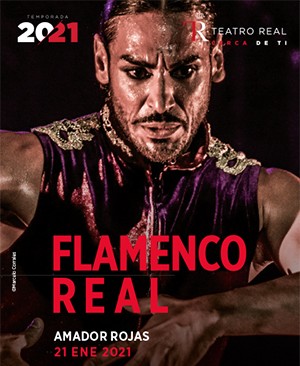 The Sevillian bailaor Amador Rojas (The palaces, 1979) come back next thursday, 21 from January, to the Royal Flamenco cycle of the Teatro Real. Accompanied by a splendid artistic picture, in which the flamenco guitarist appears Antonia Jimenez, the singer Inma "La Carbonera" and the instrumentalist Sergio de Lope, will travel the flamenco styles with the common thread of love and heartbreak.

"Love dancing", that opens in Madrid, is the first show of 2021 of this third cycle, in which until 19 of July artists such as Andres Peña Y Pilar Ogalla, Belén López, Yolanda Osuna Y Antonio Canales. In this flamenco musical dedicated to "the sorrows of the soul and heart and their joys", Rojas reels styles like the soleá, the alegrías and the tangos, with those who "complain" of betrayal and celebrate the happiness of falling in love.

The butterflies in the stomach and the endless desolation are the two extremes that support "Loving dancing", a forest of emotions in which the protagonist makes the end of the traditional festival of flamenco shows the allegory of the rebirth of a new love in the new love.

This pure gypsy began to dance at the age of seven by the hand of Farruco, but she could never take classes because she couldn't afford them. However, to the 12 He already danced as a soloist and created his own choreographies.

To the 16 years he joined the company of Salvador Távora, in which he spent five years touring the world with the production "Carmen". Then he was part of Eva Yerbabuena's company, with which he participated in shows such as "A cuatro voz" or "Cinco mujeres". Shortly after Antonio Canales would give him the leading role in shows like "La casa de Bernarda Alba" or "Mano a Mano".

Already with his own company he mounted "Kahlo Caló", based on the life of Frida Kahlo, a show for which he received the award for Revelation Artist of the Seville Flamenco Biennial of 2008.

The following year he released "Mandala", a mixture of tradition and flamenco avant-garde on the twists and turns of life that has been represented in the United States, France and Brazil.

In the show that the day presents 21, Amador Rojas -that inaugurated the first edition of FLAMENCO REAL with “Poseidón y el hombre” in 2018-, will be accompanied to the cante by the Sevillian Inma "La Carbonera" (1971); the guitarist from Cádiz Antonia Jimenez (1972); the flute player and saxophonist from Córdoba Sergio Lope (1985) - “Filón” award from the Cante de las Minas festival in 2017- and the percussion of the also Cordoba Lolo Plantón (1984).

In this third edition, REAL FLAMENCO, in co-production with SO-LA-NA, adapts to current health safety regulations by changing the configuration and structure of the entire cycle. A) Yes, the old format, with chairs and tables with Spanish wine, like a tablao, It has been replaced by armchairs arranged in a semicircle, like an auditorium, of which they will hardly take care 130 seating (40% of the total capacity), keeping the proper safety distance. Also the schedules of the performances have been affected, getting ahead of 18.30 hours and 20.30 hours, with the opening of the door of Calle Felipe V half an hour before the start of each show.

Shows take place every three weeks, Thursdays or Fridays, in double session; prices have been lowered a 15%, in relation to previous editions, and a new category of seats has been created with prices ranging between 25 and the 65 euros.