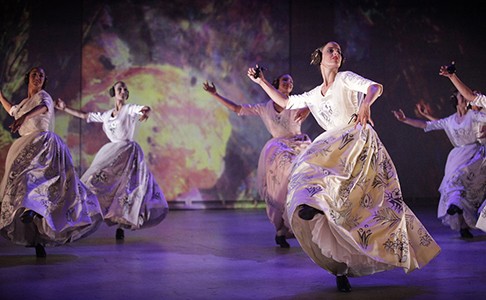 Next Thursday 9 of November, the stage of the Royal Theater will be filled with colors and light Joaquín Sorolla through the eyes of Antonio Najarro, director National Ballet of Spain, who, based on the work of the Valencian painter, has created one of the most recognized shows his recent repertoire.

Inspired collection “Vision of Spain”, Joaquín Sorolla for the Hispanic Society of New York 1911 and I wanted to reflect the customs of the different geographical areas of our country, Najarro plays the most important dances of Spanish folklore alongside stylized creations of Spanish dance, bowling school and flamenco.

Since its premiere in 2013, the occasion of 150 anniversary of the birth of painter, Sorolla He has received recognition and critical acclaim, especially for the recovery effort of traditional dances and the effort to move towards modernity without looking away from the very essence of National Ballet of Spain. The splendid choreography Antonio Najarro, which he has enjoyed the cooperation of Arantxa Carmona, Miguel Fuente, Manuel Liñán, It grows and dazzles thanks to the great work done by Nicolas Vaudelet in designing costumes and staging Franco Dragone.

The five functions that can be seen at the Theater Royal day 9, 11 (double session at 17.00 and to the 20.30 hours), 12 Y 13 of November, They will have the added attraction of live music performed by Head of the Royal Theatre Orchestra under the musical direction of Manuel Coves, alongside the NBS flamenco musicians. For Sorolla, Najarro has received original score Juan José Colomer, Paco de Lucía (Zapateado), Enrique Bermúdez (Tuna fishing Y The dance, bulería) Y popular music.

Coinciding with this release two interesting exhibitions take place. The first, entitled dancing Sorolla, includes a selection of images by photographer David Palacín in which, through portraits of the dancers of the company and its director, is disclosed in detail the wonderful costumes designed by Nicholas Vaudelet. The exhibition can be seen in the halls of the second floor of the Royal Theater performances take place while the National Ballet of Spain, with free access for the audience to functions and guided visits.

On the other hand, the Student's residence He has organized the exhibition Body Poets. Dance Silver Age, con the aim of giving visibility to creative interdisciplinary networks around the dance they emerged in the early decades of the twentieth century, through more than 300 pieces including photographs, books, mockups, locker room, documents and a selection of art works. Among other curiosities shown the history of the corps de ballet of the Teatro Real, its leading figures and the consequences of their disappearance, with the closure in the arena 1925, with pieces like a receipt the corps de ballet of the season 1884-1885, first photographs of dancers like María Esparza and Teresina Boronat, or the contract and the playbill of the theater with Anna Pavlova in his Spanish tour 1919, among others.

As well, for the first time, he 7 of November, to 20.15 hours in the Sala Gayarre, begin the cycle approaches dedicated to dance, in which the critic and writer Roger Salas present and moderate a discussion prior to the premiere of Teatro Real. This time, under the title Spanish painting and dance: From Goya to Picasso, and accompanied by the choreographer and dancer Aída Gómez, the influence of painters and composers discussed in the coréutica wording of the twentieth century Spanish dance.