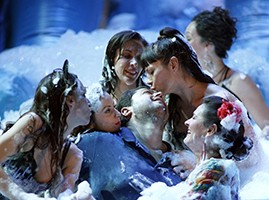 The story of L'elisir d'amore from Gaetano Donizetti Real, It dates back to the early history of the Madrid Theatre. He went on stage for the first time 1851, one year after its opening by Queen Elizabeth II. Since then the opera is more often depicted, with the functions of this production will be more than 80, and always with great success of public.
This work of Donizetti, which it has the influence of Rossini and Bellini contemporaries, bufo and romantic melodramma, It presents all components of the genre postbelcantismo. But it is not only bufa, It has a dramatic and emotional charge that is clearly reflected in the melancholy Nemorino. his argument, traditional and simple. A great economy of means, both orchestration and action and gimmicky and harmonious music, though seemingly simple, it is beautiful. To this freshness and optimism that distills the work together. sufficient grounds to offer, with guaranteed success, audiences of the time he did not need more to be satisfied.
I think that these reasons are not sufficient at present. Although you should never neglect the necessity and importance of leisure, even for a moment, but it is more than appreciated attend a production with some added value, precisely to give continuity to the mastery of its composition. The importance of the voices, musical direction and scenography, They are as fundamental.

Musical director wanted to recover the original score and orchestration fresh light. With the intention of obtaining a result of finesse and elegance in music performance. But Vicente Alberola, directed only two functions, not complicated and address, is not that prove low risk, It is that it had no substance. The result was flat and uninspiring.

Quite the opposite happened with the scenery of the young Damiano Michieletto. It was his debut at the Royal and had some curiosity about their successes, a growing recognition and some other resounding failure.
His bet for L'elisir d'amore has been to an actual beach that was not lacking in detail. Or props or peculiarity and variety of characters. In principle all very original.

Eleonora Buratto, as Adina, It has evolved from its Don Pasquale last season. Her generous voice volume is accompanied by good projection and diction. It started with some nasality that corrected immediately. Beautiful voice and good looks of a character with little theatrical requirement.
To young man Antonio Poli he came a little big the role of Nemorino. His voice suggests very good manners but has work ahead. It has a good melodic line but lacks fiato and tension in pianos. Lacks comic vein, capacity and importance theatrical scene, especially when dealing with a major role.
Erwin Schrott, bass-baritone (more baritone than under) Uruguayan who played Dulcamara, He had an appearance in spectacular scene. The time redbull, including hostesses, marketin and all-terrain, He was the delight of a, until that moment, mortecino Público. His Dulcamara was not exactly breath. This is a tacky beach that trapichea with certain substances. One the protagonist substance. His voice is powerful, sometimes too and, although it did not chart the appropriate character in the theatrical, If you picked up the work since it appeared on the scene. The audience celebrated and thanked the applause.
Fabio Maria Capitanucci as Belcore was not up to the character. His voice lacks brightness and nuances nor resolved scene. Missing spark, although he was more successful in part buffa that Schrott.
Ruth Rosique, as Giannetta, He left us all wanting more. It is time to offer this young soprano sanluqueña a more important character. We have high-quality voices that fill very well main characters without resorting to third-party international deals. But the third deals, such as, They are also God.