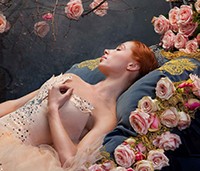 Five years have passed since Nacho Duato will stop being in front of the National Dance Company. The same five years it took the master to return with a production designed and directed by him. Five years is too long an absence when it is like this.

He appears in front of the Staatsballett Berlin. Company resulting from the union of the respective dance formations of the three Berlin opera houses: State Opera Under der Linden, German opera Y Weird opera. Thus becoming one of the most important classical ballet companies in Germany and prestigious in the world..

He came to Teatro Real with a classical ballet after twenty years dedicated exclusively to contemporary choreography. Sleeping Beauty, with music Chaikovski and based on the version of Charles Perrault. This tale conveys, from the early stages, to a magical world. And he does it hand in hand Pedro Mayor whose powerful baton drew extraordinary energy from the Orchestra. Perfectly coordinated with the dancers who had their main ally in music.

The first act is the most evocative. a children's story made music and conceived from the beginning by the composer to be danced. It is framed in the scenery of Angelina Atlagic as if it were a painting, everything is color and volume, that give a great depth to the stage.

In the second act, nature is the protagonist. The colors and costumes are impressive. Even more so if lighting enhances and balances. The third act breaks with the dynamics of the previous two. The appearance on stage of characters from other stories, distracts from the original plot.

It's a classical ballet, but with contemporary nuances, from which it seems that Duato cannot be detached. Although it is difficult to identify him in the whole choreography. With this work Duato has wanted to put the accent on the choreographic technique. He himself explains that he wanted to reflect in this choreography:"A renewed classic, lighter, lighter, closer to the public. It's hard to attract young people to the theater after spending all day with iPad. That is why I have tried to refresh it a bit and remove the dust ".

Pedro Alcalde's address is brilliant. Full of strength and rhythm and always aware of the dancers. Something very important in such an extremely exact art in the inputs and actions.

The corps de ballet, headed by Michael Banzhaf, as Rey Florestan and Beatrice Knob, like a queen, make up a sleeping beauty full of delicate plasticity. And they know how to interpret those keys that Nacho Duato prints in all his ballets.

The Royal Theater begins season with a ballet. Something unusual but extraordinary. Starting off so beautifully can only be the preamble to a great season. Delusion, no lack. That is not innocence.