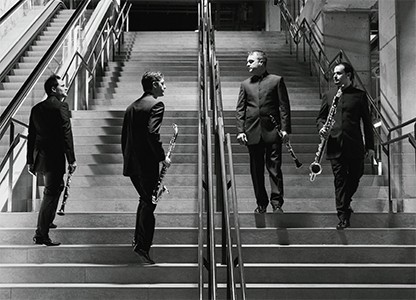 Barcelona Clarinet Quartet Players (BCP) will offer next Friday 19 May at 20 hours a concert in the Max Haner Cloister from the center Arts Santa Monica in which he will perform the absolute premiere of five compositions created by five of the best composers on the current music scene.

Joan Magrané, Bernat Vivancos, Charles de Castellarnau, Raquel Garcia-Thomas Y Josep María Guix sign these new creations that are grouped on this occasion under the generic title Offertorium. A program that is the result of the interest of the BCPs to promote the works for this training together with the enrichment of working with their own authors. The different styles and aesthetics between them, allow an exploration of all technical possibilities, timbres and interpretations of the clarinet quartet.

For Manuel Martinez, Javier Vilaplana, Martí Guasteví Y Alejandro Castillo, BCP components, It has been a challenge and at the same time a great satisfaction to work each of the five works with their respective composers., since the joint work between creator and interpreter has made it possible to explore the possibilities of training to the limit, at the same time that it has been guaranteed that the claims of the composer are fulfilled. The quality of the works and the extreme aesthetic difference between them will provide attendees with a sound kaleidoscope of avant-garde musical trends with more international projection..

The concert will begin with the work of Joan Magrané (Reus, 1988) Night hunting, which takes the title of the homonymous work of the painter Paolo Uccello. It is a miniature written in homage to George Shiras, American naturalist born in the mid-1800s who gave up hunting to pursue photography, applying the techniques of the first. The work is divided into three linked movements: first, At midnight forest weaving, presents a mysterious and dark space, constantly changing; the second, Moonlight, is static and contemplative, a moonlight that connects with the third; Love song, where -as in a return to the beginning-, the subtle sounds of the forest and the lake appear and disappear almost without development.

Offering, by Bernat Vivancos (Barcelona, 1973), and what gives the concert title, is a work where austerity and simplicity want to have the leading role. The author wanted to minimize as much as possible, and at all levels, compositional resources. The cult of sound, to its simple vertical structures, wants to also be in the foreground, where the important thing is not what is heard, but listening itself. Offertorium doesn't just have a religious connotation, emphasized by the enveloping sonority of the Tam-tam, that sometimes accompanies the speech and makes the music more mystical. The word that gives name to the work also wants to represent the ability to offer, to show, deliver, but, entrust what we consider important to whom we consider important.

Trames will be performed in third place, of Carlos de Castellarnau (Tarragona, 1977). Unlike other works by this author, this piece maintains a state of recollection, not absent of a certain drama, for almost its entire duration, avoiding as much as possible the highlights and, especially, the usual Dionysian character of the music of this composer. The work consists of four non-divergent concatenated sections, sharing common traits.

… Gazing at stars…, Raquel Garcia-Thomas (Barcelona, 1984), It is inspired by the interpretation that the North American pianist Bill Evans made of the song Like Someone in Love in April 1962. In this case, the clarinet quartet takes it and makes it their own, dilating it noticeably and allowing the original theme to emerge only a couple of times.

Josep María Guix (Reus, 1967) is the author of the composition with which BCP will conclude this concert. Restless wind starts from a technical approach based on a very simple idea: trying to produce with a clarinet quartet a sound and spatial game similar to that of a solo instrument work with electronic processing in real time - filters and delays, especially-.
After the concert in Santa Monica, The BCPs hope to be able to offer it in other auditoriums and contemporary music festivals inside and outside of Catalonia as well as in events and meetings dedicated to the clarinet.

further, are about to release their second album, the recording of the work Czernowitzer Skizzen by the composer Alexander Kukelka
further, the following season will mark the debut of the quartet with some of the most important bands in the state, like the ones in Barcelona, Palma de Mallorca or Bilbao. They will also have their appointment with the little ones with the educational concert ‘Planeta Clarinet’ at the Barcelona Auditorium and two new record projects, one with works by Enric Palomar with cantaor Pere Martinez and the other with a suite by Joan Vidal, with the composer himself on drums and the pianist Marco Mezquida.

Innovation, fusion, interdisciplinarity or pedagogy are some of the concepts that best define the creative line of the BCP. The group is born the year 2010 and is made up of members of the Municipal Band of Barcelona. Despite his short career, were invited to participate in the V National Congress and II European Congress of the Clarinet held in Madrid on December 2011, as well as at the ClarinetFest 2015 based in the same city.