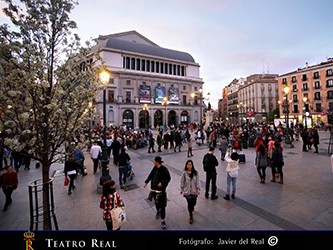 The next January will officially begin three years of programming and commemorations with which the Teatro Real will hold, At national and international level, a double anniversary: the 200 years after its founding, in 1818, by King Fernando VII; and the 20 years of its reopening in 1997, after a complex and pioneering architectural rehabilitation, which he became the scene of Real a benchmark among its similes, both for its sophisticated theatrical technology, and its organic functionality.

The commemoration of both ephemeris, declared "event of exceptional public interest" by the Budget Law 2015, It is a recognition of the historical role of the Royal Theatre and contributes to strengthening its national and international presence, bringing opera to the entire Spanish territory as a meeting point for cultural and artistic.

Two axes punctuate the programming of the next three years: the extension of the operatic repertoire of the Royal Theater and the development of various projects of social dissemination and popularization of opera in Spain, and the recovery of its assets.

Of the 43 operas will be offered in the next three years -2016, 2017 Y 2018-, about thirty will be presented for the first time in his scenario, thickening the list of titles of the Royal Theater and filling some gaps in their repertoire, marked by the vicissitudes of his dashed and checkered history, Reflecting the political idiosyncrasies, social and cultural development of each period of its activity.

The broad artistic and commemorative activities program reaffirms the commitment of the Teatro Real opera transforming vocation, able to radiate its spectrum to all corners of Spain and the world, bringing emotion, placer, beauty, reflection and debate at a public increasingly diversified and participatory.

In the wake of its history, The new program aims to enrich the repertoire of the Royal Theater essential titles not yet included in its musical heritage, especially twentieth-century classics. They will alternate with great romantic operas, lesser known works Baroque and Classicism and important world premieres of the XXI century, that will offer a multifaceted view of the current musical creation.

Premieres at the Royal Theater

A) Yes, They will debut on stage at the Teatro Real two señeras and monumental works of the twentieth century: Moses und Aron, from Arnold Schoenberg (1874-1951) which it will be offered for the first time in the conceptual stage version reading Romeo Castellucci and musical direction Lothar Koenings- Y The soldiers, from Bernd Alois Zimmermann (1918-1970), with staging calixto Bieito and musical direction Pablo Heras-Casado.

The twentieth century will also make its debut at the Royal The Golden Cockerel, from Nikolai Rimski-Kórsakov (1844-1908), Joan of Arc at the Stake, from Arthur Honegger (1892-1955) which will be presented along with lyrics The elected damsel, from Claude Debussy (1862-1918)- and two very different works Benjamin Britten (1913-1976): Billy Budd Y Gloriana.

The premiere in Spain of two classic of Latin American operatic production will enrich the heritage of Real with the taste and burning of mestizo music Bomarzo Argentine -Opera Alberto Ginastera (1916-1983)- and orchestration delirious and torrid Yerma, from Heitor Villa-Lobos (1887-1949) the eponymous drama Federico García Lorca.

Der Kaiser von Atlantis, the ill-fated Viktor Ullmann (1898-1944), and contemporary Street Scene, from Kurt Weill (1900-1950), created both in 1943 by Jewish composers victims of the Nazi horror, They reflect different expressive ways of opera marked by the ravings of war: the first was written in the Terezin concentration camp and the second set in the New York exile as a rabid allegation against injustice, imbued with African rhythms and melodies voluptuousness of Broadway.

The great Finnish composer Kaija Saariaho (1952) will debut at the Royal with two new short operas inspired by Japanese Noh theater -Always Strong Y Feather Mantle—, together under the title Only the Sound Remains, which gives its name to the show conceived by Peter Sellars and starring countertenor Philippe Jaroussky.

On the same stage two expected to take place world premieres Spanish composers. The city of lies, of Seville Elena Mendoza (1973), of stories by the Uruguayan writer Juan Carlos Onetti to articulate the story of four female musicians with stocks distorted by an oppressive reality and flawed, in the imaginary city of Santa Maria.

In the letter opener, sixth opera Luis de Pablo (1930), the octogenarian composer again collaborated with writer Vicente Molina Foix, this time to give voice to artists, writers and intellectuals during the outbreak of the Civil War. For his choral opera will parade, besides anonymous beings, the boy Federico Garcia Lorca, Miguel Hernandez, Eugenio d’Ors Y Vicente Aleixandre, whose dramas, restlessness and anxiety deeply marked the Spanish literature.

Avant-garde works in the Canal Theater

Next year collaboration is resumed with the Canal Theater, which is consolidated as a fundamental space for the presentation of art shows integrated into the artistic programming of the Teatro Real. During this season the two works already announced will be presented -the Knight of the Sad figure, from Tomás Marco (1930), Y 2 Delusions about Shakespeare, from Alfredo Aracil (1954)- inspired texts Miguel de Cervantes Y William Shakespeare, respectively, and joined by the commemoration of the fourth anniversary of the death of both writers, in 2016.

Other interesting shows, very different turn and profile, They will use the multipurpose rooms of the theaters run by Albert Boadella: Powder her Face, the first and daring opera composer in London Thomas Adès (1971), cheekily charge against the double standards of the high British bourgeoisie, in condemning a libertine Duchess, debased by a sex scandal. The work will premiere in Spain after his success in several European theaters since its resounding first in 1995. Wilde, the Barcelona Hector Parra (1976) Y Misunderstanding, Argentine Fabián Panisello (1963), Also they premiering in Spain; While Picasso, from Juan José Colomer (libretto by Albert Boadella) have your World Premiere sponsored by the Real within the framework of collaboration with the Canal Theater.

Alternating with these and other contemporary works, They will be incorporated into the history of Real operas of the seventeenth and eighteenth centuries, as Jason, from Francesco Cavalli (1602-1676), Rodelinda, from georg Friedrich Handel (1685-1759), Catone in Utica, from Leonardo Vinci (1690-1730) Y Lucio Silla, young Wolfgang Amadeus Mozart (1756-1791). The Salzburg genius completed two operas will also be offered the year of his death: La clemenza di Tito Y The magic Flute.

These great performers, to which new names will be joining in the course of the commemorations, will act together to Headlines Choir and Orchestra of the Teatro Real, recognized by the rigor, professionalism and dedication of its interpretations. He will work assiduously with them the Musical Director of Teatro Real, Ivor Bolton and Principal Guest, Pablo Heras-Casado, followed by others great directors, many of them specialized in a type of repertoire, as Roberto Abbado, David Afkham, Marco Armiliato, Semyon Bychkov, James Conlon, Pedro Halffter, Nicola Luisotti, Daniel Oren, Renato Palumbo, Evelino pido, Josep Pons, Marc Piollet, Christophe Rousset O Tim Murray. This diversity of profiles, Suitable each title, will help increase the vaunted ductility stable bodies of Teatro Real, that is because, definitely, the growing prestige of the Theater.

Dialogue with the past

Finally, in this commemorative programming it has taken into account the past and recent history of the Royal Theater, with winks and tributes to his memory and his pubic. A) Yes, They will be presented Bookmark which opened its hall in 1850 and Aida, the opera most represented in the Real during the period prior to its reopening.

With Parsifal, It will be a tribute to the first artistic director of the Teatro Real, Luis Antonio García Navarro (1941-2001), who said goodbye with a memorable performances of this opera in March 2001.

Gerard Mortier (1943-2014) It will be remembered with one of his favorite productions, which he appeared in all theaters and festivals directed: La clemenza di Tito, conceived by Ursel Y Karl-Ernst Herrmann, whose production belongs from 2012 funds the Royal Theater.

The vast majority of the works scheduled in the next three years are co-produced with the most prestigious opera houses in Europe and America, It is reflecting the excellent international positioning of the Royal Theater among their peers.

A) Yes, Real they have joined some of the most representative and influential opera, highlighting the special bond with Paris Opera and the Royal Opera House de Londres, with which there are signed several joint projects.

Many of these operatic productions will be recorded and / or broadcast live on the platform opera streaming The Royal Theatre www.palcodigital.com, in cinemas and they will be distributed worldwide in both DVD like in TV or through different digital windows.

In the field of ephemeris Royal Theater, It reaffirms its commitment to the protection and dissemination of their heritage, rehabilitation of his memory and, especially, the purpose of open its doors to all, tried to seduce those who have not yet discovered and lived the emotion of opera.

New technologies will enable retransmit the most popular operas of the Teatro Real in cinemas across Spain and screens installed in places, auditoriums, polideportivos, museums or universities with the complicity of cultural and municipal institutions concerned and with the support of Hispasat, under the agreement signed last November.

For next year are planned live broadcasts of I puritani, from Gaetano Donizetti, in cinemas in Spain and the rest of the world Otello, from Giuseppe Verdi, in squares throughout the Spanish territory.

These broadcasts will join other creative projects, attractive and interactive, inside and outside the theater, to encourage active public participation in the artistic proposals of the Royal Theater.

In this framework will continue the concert series Universal Music Festival, During the month of July will bring to Real artists of national and international prestige.

Among the projects promoted by the celebrations, They will be undertaken several initiatives to publicize the Royal Theater, his story, his life and his repertoire. Among them we can highlight:

Edition of two books dedicated to the history of the Royal Theater: one of Joaquin Turina and other Rubén Amón.

Updating and digitizing Historical Archive Theater to open to researchers and the public.

Creating a record collection dedicated to the preservation and dissemination of Spanish lyrical repertoire.

Theater opening renowned photographers to portray their work, its art and magic.

Organization of monographic exhibitions in order to teach the art collection of the theater and the secrets of their activities in different spaces.

Institution of Medals Teatro Real, they recognize the merit of individuals or institutions in the field of opera.